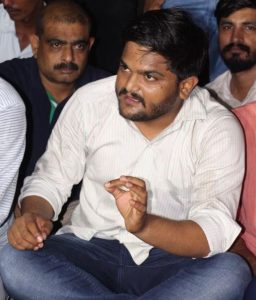 A Gujarat court on Wednesday, sentenced Patidar quota agitation leader Hardik Patel to two years of imprisonment in a case of provoking violence during a protest rally in 2015.

The Visnagar Court held Hardik Patel and his two aides Lalji Patel and AK Patel guilty and sentenced them two years of imprisonment along with a fine of Rs 50,000 each.

The FIR was filed against Hardik Patel at Visnagar in Mehsana district in July 2015, for vandalising the office of local Bharatiya Janata Party (BJP) MLA Rushikesh Patel’s and assault on some media persons, during the protests.

Cases were also registered against 17 others.