Cricketer-turned-politician Harbhajan Singh is one of the star campaigners of the Aam Aadmi Party for the Assembly elections in Gujarat, to be held in two phases on December 1 and 5.
AAP’s list of star campaigners for Gujarat comprises 20 names, including Delhi Chief Minister Arvind Kejriwal, Punjab Chief Minister Bhagwant Maan, Sanjay Singh and Raghav Chadha, among others.
The list also has the name of Deputy CM of Delhi, Manish Sisodia, who was recently under the radder of central probe agencies in connection with the alleged irregularities in Delhi’s liquor policy.
Political parties including the BJP, Congress, Samajwadi Party and few others, have submitted their list of star campaigners to the Election Commission for the upcoming Assembly polls in Gujarat.
The BJP’s list of 40 star campaigners include PM Narendra Modi, party chief J.P. Nadda and many senior ministers, including Amit Shah, Rajnath Singh, Nitin Gadkari and others.
Similarly, Congress’ list also has 40 names, including Sonia Gandhi, Rahul Gandhi, Priyanka Gandhi, Mallikarjun Kharge, Ashok Gehlot, Bhupesh Baghel and others.
Samajwadi Party’s list of 20 star campaigners include party chief Akhilesh Yadav, Jaya Bachchan and others.
Bahujan Samaj Party (BSP) has also submitted its list of 40 star campaigners, including Mayawati, Akash Anand and others.
Polling will be held on December 1 and 5 in Gujarat, while counting of votes will be taken up on December 8. 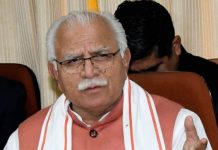