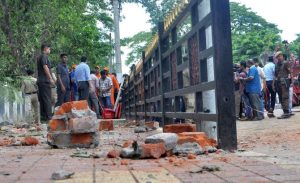 At least four people were injured on Saturday in an explosion that occurred near Sukleswar ghat area on the bank of Brahmaputra River in Guwahati, police said.

The explosion occurred at the Pan Bazar area in the afternoon just a couple of days before the beginning of Durga Puja festival.

All injured were admitted to the hospital, police said.

According to the Senior police officer, “it is not suspected to be bomb explosion as there were no splinters found and the injuries were due to stones hitting them.”

“The blast area has been cordoned off and are waiting for the bomb squad to arrive,” police said.

In farewell address, Donald Trump wishes success to next administration