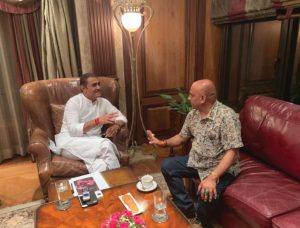 With polling to remaining 17 Lok Sabha seats over on April 29 in the fourth and final phase, polling to all 48 parliamentary seats of Maharashtra is over and the final outcome on May 23 is awaited anxiously by all and sundry. It is a guessing game for anyone to whether the BJP-Shiv Sena alliance will be able to replicate its 2014 performance when the alliance had secured 41 of the 48 Lok Sabha seats in the state.

Many experts concede that it would be a herculean task for the BJP-Shiv Sena alliance to replicate 2014 because odds are against them in view of the absence of any ‘Modi wave’, rural distress, youth unemployment, emergence of the Vanchit Bahujan Aghadi under Prakash Ambedkar and MNS chief Raj Thackrey’s campaigning against the BJP-Shiv Sena combine. This scenario reminds of Amitabh Bachchan’s famous dialogue from his movie Agnipath: <Hava bahut tez chal rahi hai. Dinkar Rao topi sambhalo>, (Air is blowing very fast, Dinkar Rao, take care of your cap).

Having won 41 of the 48 Lok Sabha seats by the BJP-Shiv Sena alliance in the 2014 General Election, the alliance suffered a loss in the by-poll and the BJP had 22 seats, Shiv Sena had 18 seats, the NCP had five seats, the Congress had two seats and the remaining one seat was held by the Swabhiman Paksha in the outgoing Lok Sabha. Many critics have opined that at the current juncture, there is no Modi wave and the sentiment is against the BJP due to agrarian distress, rising unemployment, Dalit unrest and host of other issues contributing to anti-incumbency factor against the NDA-ruled Centre.

Hierarchical pattern is very strongly discernible in the Maharashtra politics amongst the new generation of leaders from the state’s political families during the recently-held Lok Sabha election and this pattern has been reportedly transformed into ambitious and even aggressive actions in the past couple of months. Induction of Sujay Radhakrishna Vikhe Patil into the BJP occurred at a time when his father’s party, the Congress was engaged in a fierce struggle against the ruling BJP-Shiv Sena alliance and also spurred senior Vikhe Patil to resign from the Congress. The NCP chief Sharad Pawar had reportedly to make way for his grand-nephew and Ajit’s son, Parth.

According to observers of Maharashtra politics, at least a third of the 48 Lok Sabha constituencies in the state have at least one member of a political family contesting. Interestingly, as some experts opine, virtually every district in western Maharashtra has its own political family to reckon with; and each family tends to be proximate to the power-hub or ruling parties to ensure the safety of their family interests thereby making political power imperative for their business interests to thrive on as well as paving way for the induction of next generation into politics.

NCP state chief Jayant Patil and Congress leader Pratik Patil hail from a family with strong presence in politics and cooperative sector in Sangli. The tussle for control over district politics between two families surfaces regularly, latest being the corporation election held late last year. Mohite Patils enjoy their bastion in Solapur, with the baton passed on to the next generation. Sushilkumar Shinde, a former CM, and his MLA daughter Praniti have established themselves as key leaders in Solapur. According to media reports, in Kolhapur district, Satej Patil, son of former Bihar governor DY Patil, and MP Dhananjay Mahadik are carrying the family legacy forward. Maharashtra Congress chief Ashok Chavan is the son of former chief minister Shankarrao Chavan and has MLA wife Amita. In North Maharashtra, senior BJP leader Eknath Khadse’s daughter-in-law Raksha is an MP. NCP leader Chhagan Bhujbal and his nephew Sameer and son Pankaj call the shots in Nashik. BJP leader Vijay Gavit has political control over Nandurbar district and his daughter Heena, is an MP.

Thackerays’ are best known as the ‘first political family’ of Mumbai. Shiv Sena founder Bal Thackeray’s decision to make son Uddhav, and not nephew Raj, the political heir, led the latter forming his own outfit, Maharashtra Navnirman Sena, in 2006. Uddhav’s son and head of party’s youth wing, Aaditya, has no rival within until his younger brother Tejas joins politics.

The ruling BJP-Shiv Sena alliance both in the State and at the Centre is confronted with anti-incumbency wave in the wake of unemployment, agrarian crisis and Dalit unrest. The demolition of the press of Babasaheb Ambedkar and the riots in Bhima Koregaon are only a few among such cases that led Dalits hit the streets, protesting against not only these cases but also against the casteist politics of the ruling BJP.

Undoubtedly, the BJP-Shiv Sena alliance is pulling out all stops to eliminate the influence wielded by the NCP satraps, especially the Pawar clan, in the ‘sugar belt’; nevertheless, the contest remains unpredictable owing to the personality-centric politics pervading the region. In the sugar belt of Maharashtra, party loyalties seldom figure in the calculations of local leaders who are only concerned about their sugar cooperatives and business establishments. The BJP is trying to increase its clout in this region by pouching disenchanted NCP leaders.

Even after having won 41 of the 48 Lok Sabha seats in 2014, it was not an easy task for the BJP and Sena to retain their old alliance. Media reports indicate that in the post-2014 period, the Sena had on multiple occasions hinted that it would head to the 2019 polls alone, using its mouthpiece Saamna to hit out at the BJP and Prime Minister Narendra Modi.

Having continued its tirade against the BJP for over three years, suddenly on February 18 this year, the two sparring allies decided to patch up and retain their tie-up in the 2019 Lok Sabha election and the ensuing state assembly elections due later this year. In the pre-poll alliance sealed between the BJP and Shiv Sena, the former is contesting on 23 seats and the latter contesting on 23 Lok Sabha seats; with both sides agreeing to equally split the assembly seats between themselves.

According to many experts, this high-voltage political theatrics of opportunism on the part of Shiv Sena have not gone well with the general masses and even party members of both sides are often seen expressing their resentment against the sitting MPs of the alliance party. This entails the likelihood of lesser number of seats for the alliance.

Stakes of Congress and NCP

In terms of the seat-sharing pact between Congress and NCP, the former is contesting 26 seats and the NCP is gunning for the remaining 22 seats, with both parties agreeing to vacate two seats each to accommodate their allies. The Congress and NCP satraps enjoy predominance over local bodies, the sugar and milk cooperatives, and the educational and financial institutions in the sugar belt of western Maharashtra.

Some experts have opined that the BJP-Shiv Sena combine has been attempting since 2014 to make inroads in the region, not by creating its own base, but by importing Congress-NCP leaders into their fold.Nevertheless, this time the Congress-NCP leaders, along with Shetkari Sanghatana, are making all efforts to retain their base, which has been the lifeline of their politics by banking on farmers’ unrest, unemployment and disenchantment of the Dalits with the BJP-Shiv Sena combine regime.

This author’s recent tour of these and other areas confirms reports appearing in the media that rural voters support Congress-NCP alliance. Some sources close to the Congress have revealed that this time Congress is confident of winning more than 15 Lok Sabha seats.

Raj Thackrey, Maharashtra Navnirman Sena (MNS) chief, who started addressing public meetings from the closing part of the first week of April this year has emerged as a potent factor in this ongoing process of Lok Sabha election in Maharashtra. Most of the videos of Raj Thackrey have gone viral across Maharashtra, spurring thousands of memes, social media posts and, most importantly, ensuring a centre-spot in speeches and press conferences of the ruling BJP.

Having chosen to take on Modi-Shah duo of his own, and having addressed more than 12 rallies across Maharashtra amid growing crowds, has enabled Raj Thackrey to enhance the electoral prospects of Congress-NCP combine in the recently-held Lok Sabha elections and carving out for himself a niche of his own as a force to reckon with in the forthcoming state assembly polls. One expert has opined that by upping the ante, the MNS chief has made the BJP uncomfortable and the Shiv Sena nervous.

In the context of Maharashtra, where unemployment, agrarian distress and Dalit unrest are among the most important factors shaping these Lok Sabha polls, it is interesting to see whether it will stand in good stead for Congress-NCP alliance and let the BJP-Shiv Sena combine glide downside of the hill. Some experts opine that the unity of the Congress and the NCP, and the extent to which their leaders can tide over past differences, will be a deciding factor in the final outcome on May 23. Besides, it is also argued that anti-incumbency against NDA candidates, Raj Thackrey factor and absence of Modi wave may work in favour of Congress-NCP alliance this time. Let’s wait and watch till May 23.