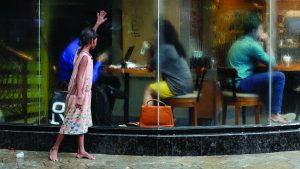 Growing inequality in both developing and developed countries could exacerbate divisions and slow economic and social development according to a new UN report, the World Social Report 2020 that was released on January 23, 2020.

More than two thirds of the world’s population today lives in countries where inequality has grown. According to the report, which has been produced by the UN Department of Economic and Social Affairs, highly unequal societies are less effective at reducing poverty, grow more slowly, make it more difficult for people to break out of the cycle of poverty, and close the door to economic and social advancement.

The report provides evidence showing that technological innovation, climate change, urbanization and international migration are affecting inequality trends.  These disparities between and within countries, the report says, will inevitably drive people to migrate. The report notes that, if it is well managed, migration will not only benefit migrants, but it can also help reduce poverty and inequality.

With increases in migration from rural areas, more than half of the world population now lives in urban areas. While cities can drive innovation and boost prosperity, many urban dwellers suffer from extreme inequality. In a world with high and growing levels of urbanization, the future of inequality largely depends on what happens in cities and the advantages that cities bring may not be sustained if high urban inequalities are not reduced.

And in developing countries, children in the poorest households — and those from the most disadvantaged ethnic groups — have experienced slower progress in secondary school attendance than those from wealthier families, who are increasingly sending their children to better quality schools. Disparities and disadvantages in health and education are being transmitted from one generation to the next.

Emissions are increasing, global temperatures are rising, but the impacts of climate change are not being felt uniformly around the world, with the countries in the tropics being among the most adversely affected.

According to the report, climate change has made the world’s poorest countries poorer, and if left unaddressed, it could cause millions of people to fall into poverty during the next ten years. Climate change is also making things worse for the next generation, with the impacts likely to reduce job opportunities, especially in the hardest hit countries.

The report warns that, just as climate change can increase inequality, so can the policies designed to counter its effects. As countries take climate action, it will be important to protect low-income households. The rapid and revolutionary technological breakthroughs in recent decades have been a boon to skilled workers and workers who can upgrade their skills. But it has also taken a toll on low-skilled and medium-skilled workers in routine-intensive labor, whose jobs are increasingly being phased out or lost as technologies are being captured by a small number of dominant companies.

While new technologies such as digital innovation and artificial intelligence open up vast new opportunities for employment and engagement, the Report found that their potential to promote sustainable development can only be realized if everyone has access to them, which is not happening, creating new “digital divides.” About 87 per cent of people in developed countries have internet access, compared to 19 per cent in developing countries.

Technological advances can exacerbate inequalities, by giving an edge to those with early access to those technologies and can widen gaps in education if they disproportionately help the children of the wealthiest.

The report, using positive examples, presents concrete policy recommendations that can promote access to opportunity; allow macroeconomic policy to focus on reducing inequality, and tackle prejudice and discrimination. Issued as the United Nations prepares to celebrate its 75th anniversary, the report provides the analysis and policy recommendations to frame the global conversation on reducing inequality as a key condition for building the future we want.