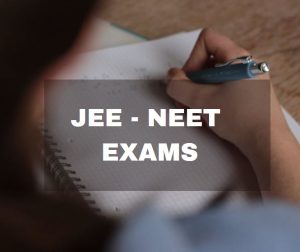 Although National Testing Agency (NTA) in several notices assured students that the precautions to stop the spreading of the virus were in place, the assurances found few buyers. However, for many students coming from flood-affected areas of Bihar and North-East states, the scenario was even more complex.

“The last couple of months have not been very kind to us, first the lockdown and now the floods. Now if in case I get infected with the virus, it will only result in amplifying our problems,” said Waquar Haider, who passed his class 12th last year and wants to get admission into IIT-Delhi.

The NTA though announced a list of precautions to calm the student uproar, the testing agency announced that the number of candidates per shift was brought down from 1.32 lakh to 85,000. The students were to be seated alternately to ensure social distancing.

For the students aiming to get admission into medical colleges, the agency announced an offline test, the number of candidates per room was reduced from 24 to 12.

Over 8.58 lakh and 15.97 lakh candidates had registered for JEE (Main) and NEET (UG) respectively this year. Generally, the JEE (Mains) exams for engineering aspirants are conducted in April while NEET is conducted for medical aspirants in May. These exams were postponed twice in the wake of the Covid-19 pandemic and the nationwide lockdown imposed on March 25 to restrict the spread of the disease, interestingly the government decided to conduct these examinations in September when the country recorded over 80 thousand cases in a single day, making it the worst affected nation in terms of the number of cases per day.

Hand sanitisers were present at the entry and exit points of the centres, along with thermo-guns to check the temperature of all staff and candidates. The testing agency also decided to keep special rooms for students with a body temperature of over 99.4 degrees Fahrenheit. Also if any examination functionary failed to meet the self-declaration criteria or thermal scanner check, they were asked to leave the examination centre immediately.

NTA had clearly said that “no one will be denied permission to appear for the examination if he/ she does not violates the Covid-19 directives/advisories of Government (Central/State) applicable on the day of exam and instructions mentioned in the Admit Card.”

Supporting the demand for postponement of NEET (UG) and JEE examinations, seven chief ministers of non-BJP ruled states, decided to jointly move the Supreme Court on the issue. Meanwhile, the interim president of Congress Sonia Gandhi accused centre of dealing ‘uncaringly’ with the problems faced by students.

Leaders like Odisha Chief Minister Naveen Patnaik also wrote to the Union Education Minister Ramesh Pokhriyal Nishank and urged the cancellation of the JEE (Main) and NEET (UG) in view of the Covid-19 pandemic.

The students’ protest was also supported by the international environmental activist Greta Thunberg.

“It’s deeply unfair that students of India are asked to sit national exams during the Covid-19 pandemic and while millions have also been impacted by the extreme floods. I stand with their call to #PostponeJEE_NEETinCOVID,” Thunberg tweeted in late August.

Among issues occupying concerns is not only the health risk posed by the vast number of students who need to appear in test centres, but also the question of how they will appear for the exams. Many administrations have placed localities under lockdowns based on the necessity to contain the spread of the coronavirus. In addition, several hopefuls may themselves be in self, home, or institutional quarantine.

Several stakeholders have pointed out that students from flood-hit states such as Bihar, Gujarat, and Assam or the rain-hit districts of Kerala or those from areas such as Jammu and Kashmir facing Internet connectivity issues will have to struggle more to appear for the entrance exams.

Students’ organisations, such as AISA, SFI, NSUI among others, held consistent social media campaigns to demand the cancellation or postponement of the exams. However the student wing of RSS, Akhil Bhartiya Vidhyarthi Parishad (ABVP) choose to stay away from protests, rather they decided to raise issues of fee relaxations in colleges.

Twitter hashtags such as #ProtestAgainstExamsinCovid garnered over three million tweets on a single day. The student community has also been holding relay hunger strikes to protest against the issue. Other exams scheduled to be held in September include Delhi University Entrance Test, Common Law Admissions Test, IP university entrance exams, and UGC-NET exams.

“NSUI’s Indefinite Hunger Strike is demanding the postponement of JEE, NEET and various examinations in the pretext of the surging number of COVID 19 cases to its peak in India,” a statement by Congress’ student wing read.

“We appeal Modi government and the Examination authorities to step back from the mindless decision to conduct the examination in these difficult days of pandemic and show humanitarian gesture towards the students’ across the country who are protesting against this catastrophic move putting their lives at stake,” it added in the statement.

Some students who have been preparing for these examinations for a very long time argued that further delay in examinations can disrupt the academic calendar and put the future of students in jeopardy.

“Conducting the exams in September would allow institutes to start online classes at the very least. Earlier this month, the Supreme Court too said that “life must go on” and students “cannot waste a whole year”, said Shivanshu Agarwal, a student from Uttrakhand.

“My parents have paid a hefty amount for tuitions and postponing exams would only bring mental and financial stress for us,” he added.

While the government remained unshaken on its decision to conducts exams, cabinet ministers of six non-BJP ruled states knocked doors of the Supreme Court seeking a review of its August 17 order allowing the holding of NEET-UG and JEE (Mains) examinations.

The SC bench of Justices Ashok Bhushan, B R Gavai, and Krishna Murari, however, refused to entertain the review petition filed by ministers from West Bengal, Maharashtra, Jharkhand, Punjab, Rajasthan, and Chhattisgarh saying there is no merit in the plea.