Union minister and senior BJP leader Ravi Shankar Prasad in a tweet message on Saturday said that the Narendra Modi government is ready to talk to the protesters at Delhi’s Shaheen Bagh if a request is made in a structured manner.

He has also posted a link of a TV debate in which he had participated.

The Shaheen Bagh protestors have been staging a sit-in for over 40 days against the new Citizenship law.

The proposal for a dialogue comes a week before Delhi is slated to vote for the elections. 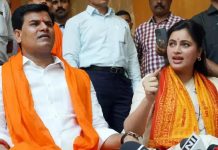