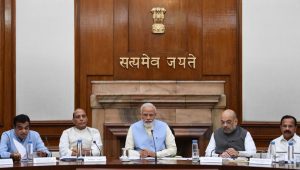 Prime Minister Narendra Modi’s government has approved a new Central Sector Scheme, a historic decision that will empower farmers across India. This is a path breaking scheme that will provide pension cover to farmers

It is estimated that 5 crore small and marginal farmers will benefit in the first three years itself.  The Central Government would spend Rs. 10774.50 crore for a period of 3 years towards its contribution (matching share) for providing social security cover as envisaged under the scheme.

A voluntary and contributory pension scheme for all Small and Marginal Farmers (SMF) across the country.

An interesting feature of the Scheme is that the farmers can opt to allow his/her monthly contribution to the Scheme to be made from the benefits drawn from the Pradhan Mantri Kisan Samman Nidhi (PM-KISAN) Scheme directly.

It was in the run up to the 2019 Parliamentary elections that PM Narendra Modi first mooted such an idea, which gradually found resonance across the length and breadth of India. Such a plan was mentioned in the BJP manifesto and in the first Cabinet meeting after the formation of a new Government, it has become a reality.