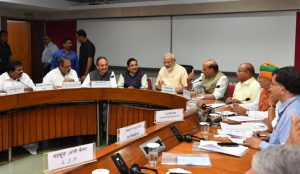 Addressing floor leaders of various parties in the Rajya Sabha and Lok Sabha on Sunday, ahead of the Budget Session of Parliament 2019 beginning tomorrow, Prime Minister Narendra Modi called on leaders of all political parties in Parliament to work cohesively with the government in running the House smoothly and to collectively address issues related to the welfare of people.

PM Modi welcomed newly elected MPs and expressed hope that fresh zeal and energy would be infused in the functioning of the Parliament. He urged all leaders to introspect whether members of Parliament are able to fulfil peoples’ aspirations as their representatives.

Modi said, “We are for the people, we cannot win hearts by disrupting the functioning of the Parliament. All parties must keep political differences aside and commit themselves to tirelessly work in the direction of Nation’s progress”.

PM Modi exhorted all leaders to cooperate with the Government and strive in the direction of making a New India by 2022 and achieve the true meaning of ‘Sabka Saath, Sabka Vikas, Sabka Vishwas’.

Modi said that Government is always receptive to the issues raised by all Political Parties and is ready to discuss all issues of national importance on the floor of both Houses of Parliament.

A host of issues were brought up by the leaders of parties during the meeting. There was a consensus across party lines on ensuring smooth functioning of the Parliament without disruptions and deadlocks to be resolved through constructive discussions in both the Houses.

After completion of the meeting, PM Modi said in a tweet, “We had a fruitful all-party meeting today, the first one after the election results and before the start of the Monsoon Session. Thankful to the leaders for their valuable suggestions. We all agreed on the smooth running of Parliament so that we can fulfil people’s aspirations.”

Briefing the media persons after the meeting, Union Minister for Parliamentary Affairs, Coal and Mines, Pralhad Joshi said that Government has requested all parties, especially the opposition, for their co-operation for the smooth functioning of both Houses of Parliament

Joshi said that, in order to build esprit de corps among members of all parties in Parliament, PM Modi has put forward two new initiatives with the beginning of 17th Lok Sabha.

To begin the newly constituted Lok Sabha on a positive note, PM Modi has invited Party Presidents of all political parties with representation in the Parliament, on June 19, and MPs of both Houses, on June 20, to freely interact and exchange views with the Government. This novel initiative would go a long way to build team spirit among all Parliamentarians and in turn, would ensure smooth functioning of Parliament in future Joshi said.

Giving details about the ensuing budget session, Joshi informed that the first session of 17thLok Sabha is scheduled to commence on June 17. 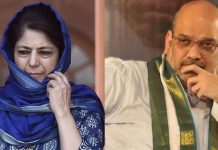 BJP moving fast, PDP on verge of split in J&K !