Indians are under extreme threat in Afghanistan. The number of those killed in extremist violence in Afghanistan during the period from January to March in 2018 was 763, which is much higher than the casualties in the first three months last year, according to the UN Assistance Mission in Afghanistan. The picture that emerges gets more upsetting if seen in the context of the Taliban groups’ rejection of the latest offer of talks by Kabul’s Ashraf Ghani government with the US focus having shifted from the Afghan-Pak region to theKorean peninsula.

There is clearly a more serious threat to Indian interests under the prevailing circumstances. Over 150 engineers and others working in Afghanistan need to be provided adequate security so that they feel secure to accomplish the tasks assigned to them. It has been confirmed that the latest abduction incident is the handiwork of a Taliban faction as was the case with the abduction of an Indian female aid worker in 2016 who was released after remaining in their captivity for 40 days.

Different kinds of calculations are being made in this regard. One, there is widespread poverty because of lack of job opportunities and gainful economic activity in Afghanistan which can make people indulge in such criminal activities easily. Most of the Afghans are illiterate or semi-literate and unskilled and hence can go to any extent to earn a few bucks. Two, almost all the Taliban factions and other extremist groups like the Islamic State (IS) and Al-Qaida are anti-government and, therefore, are always on the lookout for abducting government employees for extortion purposes. The abductions of foreign companies’ employees are sometimes cases of mistaken identity. This may be true in the case of abducted Indian engineers too.

Three, some of the extremist groups are on the payrolls of Pakistan’s external intelligence network, the ISI, which uses pro-Pakistan Taliban factions to create a scare among Indian officials and workers with a view to getting India-assisted development projects delayed, stalled or abandoned. Four, most Taliban factions are anti-India because of New Delhi being in the good books of the government in Kabul as also owing to India’s better relations with the US nowadays. So, it is a case of double whammy for New Delhi.

India faces a serious threat to its interests in Afghanistan as well as in Iran mainly because of the change in US policies under President Donald Trump. The Taliban factions, which have rejected the Ashraf Ghani government’s offer of talks for their induction in the ruling dispensation as they did it earlier too, feel emboldened owing to the Trump administration’s new strategy for the Af-Pak region aimed at drastically reducing the US involvement in Afghanistan.

There is apparently a feeling in Washington DC that the US has invested billions of dollars in Afghanistan with the loss of a number of US soldiers since 9/11 but gained very little. It is, therefore, believed that there is no point in sticking to the old US strategy when it has not resulted in the elimination of the Taliban, its primary target. The writ of the Taliban still runs in more than 50 per cent Afghan territory. Contrary to this, hardly a little more than one-fourth area of the country is in full control of the US-backed government in Kabul whereas in 2017 three-fourths of Afghanistan territory was free from the Taliban’s influence. The situation in Afghanistan is getting complicated with the entry of the IS and the increased interest being shown there by China and Russia. Of late, religious places like mosques associated with the Hazaras (Shias) have been under attack by extremists belonging to the IS and Al-Qaida.

Iran, which sympathises with the Hazaras because of the denominational factor, cannot sit idle in such circumstances. Targeting of Hazaras indirectly hits Teheran too as they try to find refuge in Iran where they are always welcome as it could be seen when Afghans in lakhs left their home in the wake of the attack by the US-led NATO forces after 9/11.

The Taliban factions, mostly composed of Sunni tribes, today appear to be more confident of achieving their two primary targets: freeing Afghanistan from the remaining foreign (US) troops and removing the West-supported Kabul regime. In such a scenario, it would be almost impossible to prevent them from recapturing power, which they had before they were dethroned by the US-backed Northern Alliance.

There are strong indications that China and Russia may begin to play a major role in Afghanistan in the coming years. China, which has been working on the idea of extending the China-Pakistan Economic Corridor (CPEC) to Afghanistan, might have devised a major plan for the landlocked nation, Iran and the Central Asian countries with the US presence becoming negligible in these areas. With the US-Iran enmity set to become worse in the wake of the US withdrawal from the nuclear deal with Iran, Teheran would be too willing to welcome the CPEC project reaching Iranian territory. Of late, Russia too has been seen to be placating Taliban factions owing to the strengthening of anti-US sentiment in Pakistan, Afghanistan and Iran.

Where does India stand in this scenario? Indian investments in Afghanistan will be in jeopardy if the Taliban factions are back to power and the regime in Kabul changes its complexion. Keeping all these factors in view, there is need for having a fresh look at India’s Afghan policy. Cultivating such elements in Afghanistan as see a threat to their national interests from Pakistan and devising a strategy of cooperative competition with China appear to be the need of the hour. India’s relations with Iran must also not be allowed to suffer under all circumstances as these can have a bearing on our interests in Afghanistan. 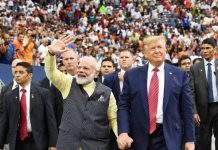