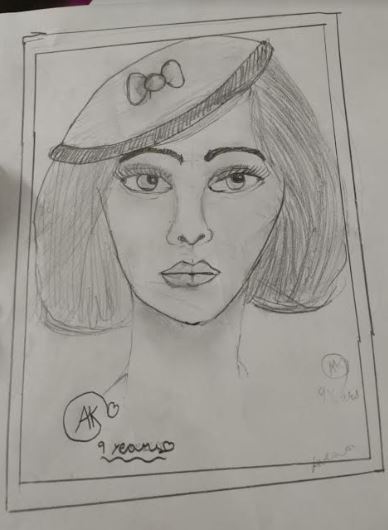 Every year 8th of June is celebrated as World Brain Tumour Day. This initiative was initially taken by German Brain Tumour Association and is now celebrated worldwide to raise awareness and educate people about the brain tumour. The Brain Tumour Research Organization in the UK started Wear A Hat Day 2020 on March 27th for raising funds and awareness for vital research in brain tumours.

Casual discussions in the family about this Wear-A-Hat-Day spurred the imagination of my 9-year-old left hander granddaughter Aira, who drew a beautiful drawing all by herself to signify that spirit. Having seen accomplishments of many multifaceted family members, the creativity and spiritual stance of Anjali, my left handed niece, who is a Noida based dress designer and now the same traits being replicated in my granddaughter Aira, another left hander, made me ponder over the reason of theiruniqueness, which is visible in the drawings made by them.

“Lefties – in great demand but limited supply”, a quote by anonymous, seemed a mystified one, till I hit upon another anonymous quote “When nothing goes right… go left”. That clinched the issue. Living in a largely right-handed world, the left handed people have to face numerous practical, though funny problems. To celebrate their uniqueness in the society every year August 13 th is celebrated as the International Left Handed Day.

According to a meta-analytic inquiry study conducted in 2014 it was found that left handed people mainly draw characters facing to the right, and right handed people draw them facing to the left. Question arose as to what affected facing direction in human facial profile drawing?

‘Creativity and Psychopathology’ was the subject of a study conducted in 2007. Surprisingly it was found that among creative artists such as painters and musicians were more likely to be left handers as compared to same age and gender peers. Prior to that a 1977 study found more left-handedness among architects than the right handed ones among the architects.

In political arena, in the U.S. some of the recent Presidents, Barack Obama, Bill Clinton, George H. W. Bush, Ronald Reagan and Gerald Ford, were left handed. In our country, Mahatma Gandhi and our present P.M. Shri Narendra Bhai Modi is the latest example of the world dominance by the lefties! In other spheres of life, Ratan Tata, Sachin Tendulkar, Amitabh and Abhishek Bachchan are the notable examples. Now I think “God made everyone right-handed, only the truly gifted overcome it”.