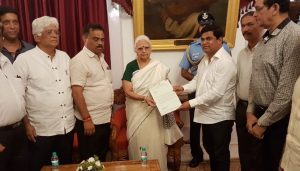 A delegation of Goa Congress on Monday met Governor Mridula Sinha at the Raj Bhavan to stake claim to form the government.

This came a day after Chief Minister Manohar Parrikar’s death.

All the 14 Congress MLAs, led by Leader of the Opposition Chandrakant Kavlekar went to Raj Bhawan and handed over a letter to Mridula Sinha.

“We met the Governor & staked claim to form a government as we are the single largest party in the state. We have 14 MLAs and we should be given the chance to form the government. We have told that we will prove majority @CKavalekar @INCIndia @INCGoa,” Chandrakant Kavlekar said.

The Congress on Saturday wrote to Governor Sinha and staked claim to form the government in Goa. Chandrakant Kavlekar urged the governor to dismiss the BJP-led coalition regime as it is in a minority and its numbers may “dwindle”.

The Congress is currently the single largest party in Goa with 14 MLAs while the BJP has 12 in the 40-member Assembly. 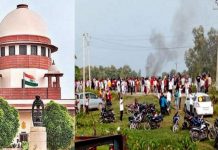