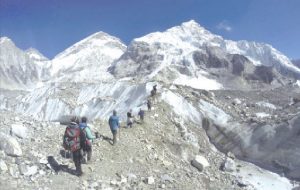 Among the most dramatic evidence that Earth’s climate is warming is the dwindling and disappearance of mountain glaciers around the world.  Scientists from Wadia Institute of Himalayan Geology (WIHG), Dehradun an autonomous research institute for the study of Geology of the Himalaya under the Department of Science and Technology, have found that glaciers in Sikkim are melting at a higher magnitude as compared to other Himalayan regions.

Compared to other Himalayan regions, the magnitude of dimensional changes and debris growth are higher in the Sikkim. A major shift in glacier behavior has occurred around 2000. Contrary to the western and central Himalaya, where glaciers are reported to have slowed down in recent decades, the Sikkim glaciers have shown negligible deceleration after 2000. Summer temperature rise has been prime driver of glacier changes.

To understand the various parameters of Sikkim Himalayas glaciers such as length, area, debris cover, snow-line altitude (SLA), and how they respond to global warming Scientists from WIHG selected 23 representative glaciers from this region. A detailed and rigorous literature survey related to the study was carried out to assess the existing knowledge in the subject. Thereafter, representative glaciers well spread over the study area were selected based on multiple criteria such as size, length, debris cover, slope, aspect, and so on. Then, the multi-temporal and multi-sensor satellite data covering selected glaciers was procured. The team analyzed the results and compared with existing studies, and the impact of various influencing factors was systematically explored to understand the glaciers state.

The behavior of glaciers in the region is heterogeneous and found to be primarily determined by glacier size, debris cover, and glacial lakes. Though a generalized mass loss is observed for both small (less than 3 km square) and large-sized glaciers (greater than 10 km square), they seem to adopt different mechanisms to cope with the ongoing climatic changes. While the first adjust mostly by de-glaciation, the latter lose mass through down wasting or thinning.

The Sikkim glaciers have been poorly studied till now, and field-based mass balance measurements have been limited to only one glacier (ChangmeKhangpu) and for a short period (1980-1987). The studies are regional in nature and do no give emphasis on individual glacier behavior. Besides, most of the existing measurements in this region have been focused on length/area changes only. Velocity estimations have also been extremely rare.

This study, for the first time, studied multiple glacier parameters, namely length, area, debris cover, snowline altitude (SLA), glacial lakes, velocity, and down wasting, and explored interlinkage among them to present a clear picture about status and behavior of glaciers in the Sikkim.

Accurate knowledge of magnitude as well as the direction of glacier changes, as highlighted in the present study, can lead to awareness among common people regarding water supplies and possible glacier hazards, particularly to those communities that are living in close proximity. The study can provide ample baseline data on glacier changes and systematically explore the causal relationship between glacier parameters and various influencing factors. A clear understanding of glacier state will help orienting future studies as well as taking necessary measures.

On February 14, 2020, Rebecca Lindsey published a paper “Glacier Mass Balance” in Science & Information for Climate-Smart Nation for Climate.gov. it said that among the most dramatic evidence that Earth’s climate is warming is the dwindling and disappearance of mountain glaciers around the world. Based on preliminary data, 2018 is likely to be the 30th year in a row of mass loss of mountain glaciers worldwide. According to the State of the Climate in 2018.

Glaciers that exist today are remnants of the last ice age. Thick sheets of ice advanced and retreated across most continents several times before withdrawing to the polar regions about 10,000 years ago. Continent-scale ice sheets still cover Greenland and Antarctica, while smaller ice caps and glaciers retreated to the world’s high latitudes and mountains.

Originally, scientists began studying glaciers only for the clues they offered about Earth’s climate during past ice ages. Today, they are also trying to understand how quickly human-caused climate change will cause them to disappear altogether.

In the Indian context, a report of the Study Group on Himalayan Glaciers submitted to the Principal Scientific Adviser Government of India presents a compilation of the available data and information pertaining to Himalayan glaciers as collected and generated by different organizations in India. The significance of Himalayan glaciers and their importance for the well-being and sustenance of natural and human systems in the surrounding countries is of importance. Glaciers are dynamic systems that exhibit variability on a range of spatial and temporal scales. Understanding these variations, and their causes and consequences is essential for efforts to sustainably manage Himalayan ecosystems and water resources, given the variety of anthropogenic and natural stresses that are occurring.

Indian glaciers are among the least studied in the world, lacking the decades of data that scientists need to deduce trends. Nevertheless, the nascent research offers a snapshot of the consequences of global warming for this country and raises vital questions about how India will respond to them.

A study by the Indian Space Research Organization, using satellite imaging to gauge the changes to 466 glaciers, has found more than a 20 percent reduction in size since 1962, with bigger glaciers breaking into smaller pieces, each one retreating faster than its parent. A vast and ancient sheet of ice, a glacier is in effect the planet’s most sensitive organ, like an aging knee that feels the onset of winter. Its upper reaches accumulate snow and ice when it is cold; its lower reaches melt when it is warm. Its long-term survival depends on the balance between the build-up and the melting.