Tamanna (17) and Hafiza (16) are residents of 24 South Parganas, Kolkata from the state of West Bengal. The girls were sold to two Kashmiri men, much older than them for an amount of 25,000 each. Both the men are from Tujan area of district Pulwama, around 40-km away from the main city of Srinagar, in the state of Jammu and Kashmir.

The girls’ parents are daily wage labourers who live in a slum under extremely poor condition. On top of that, supporting a family of seven members isn’t easy at all.

One day, the parents decided to marry off Tamanna and her sister in Kashmir after an agent Shubnam persuaded them that their daughters could lead a comfortable life and they too can earn some money in return.

Soon, these men from Kashmir got in touch with this family from Bengal through Shubnam, a native of Bengal. The sisters were informed by the family that their marriages have been fixed and both of them will be travelling to Kashmir with their husbands. The marriage happened in an informal set-up. The Nikhnama (marriage contract) was signed and both the sisters were given a small amount of money as ‘Mahr’ (alimony) for namesake.

The assurance of wealthy family, healthy lifestyle-two meals a day, and decent clothes to wear was more than everything for the girls and the family to fall into the trap. Soon, they arrived in Kashmir via Bengal-Delhi-Jammu route. Once they reached Tujan, Pulwama, their world turned upside down. The girls were kept in horrific conditions where husbands would rape them through the hours of darkness and family members would make them do all the household chores throughout the day. They were deprived of proper food and kept indoors to avoid contact with outside world. Nevertheless, the girls were in different families but experiencing a similar life of horror. The sisters were restrained to get in touch with each other.

One day in early morning, the younger sister, Hafiza, escaped the house barefoot. Luckily, she saved the money that she received as ‘Mahr’ to use when the right time comes.

Hafiza narrated, “I was praying hard that my attempt to escape should not fail… Had I been caught, I would have been beaten to death.”

After escaping from Kashmir she managed to reach Bengal. There she met a journalist, who happened to work in Kashmir. Hafiza then narrated her ordeal and revealed the details about her sister too. The journalist contacted a Kashmir-based local NGO and informed them about the case. The NGO with the help of police started a robust investigation and finally, they were successful in tracing out Tamanna.

Today, Tamanna is living with a local family in Kashmir who came to support her. They wish to become her legal guardians now.

On May 22, 2018, Tamanna appeared before the Child Welfare Committee (CWC).

Explaining Tamanna’s situation, CWC Chairperson, Munazah said, “Tamanna wishes not to go back to her hometown neither she wants to stay in a child home. The report has been sent to the CWC, Pulwama for further investigation. Once the report comes, we will be able to decide how to take forward the case.

On the other hand, the man who bought Tamanna is now pressurising her parents to ask her to return. Her parents are now trying to persuade Tamanna to go back as she has been married to him. Although she has been rescued, no FIR has been registered against the husband’s family.

Deputy Superintendent of Police Farooq Ahmad said: “Although we are investigating the case and rescued her on the NGO’s request, but,we cannot register an FIR as she has signed the Nikahnama. Also, the trafficker has provided it as a proof of marriage.”

“During the course of the investigation, we came to a conclusion that Tamanna needs to be handed over to the NGO as the girl is a minor. She was not only married out of her wish but was also kept in an appalling circumstances,” Ahmad further explained.

Here, Hafiza is back to her home but torment has not increased. In a muffled voice, Hafiza shared, “My parents beat me continuously. They ask me, ‘why did you run away? Why did you come back? They have paid us money?’”

“What can a girl like me do apart from weeping in silence?” Hafiza added.

In the case of her agent Shubnam, she too has a similar past- trafficked to Kashmir where she was married-off to a Kashmiri family. However, she soon got separated from her husband, went back to her hometown in Bengal and married a local. Shubnam then stepped in to the business of human trade- buying and sending girls to Kashmir under the garb of employment-giver, match-maker. Being a local of Bengal, it was a cake-walk for Shubnam to target girls from poor and under-privileged families, luring them with a promise of good job, high-end lifestyle or by deceptively buying them from their families.

Bride-buying common in the Valley

The horrific brutality inflicted on these teenagers is not an isolated case. Going by some information, there are more 20 to 25 women from Bengal and other parts of mainland India who have been married-off to Kashmiri men. The kinds of grooms are those men who did not find any match in Kashmir, belong to below poverty line families or are disabled. In such situation, Kashmiri men buy brides from pimps who usually smuggle girls from West Bengal or other parts of India.

In a similar incident, twelve years ago, Naseema, 29, (now a mother of three) was forcefully married off to a Kashmiri truck driver by her parents for some amount. Today, she lives in a dilapidated house at Pampore, Pulwama, where, altogether, a total of eight members live in a tiny two-room house that serves as both kitchen and bedroom. Naseema, too, is a native of Bengal and was trafficked to Jammu and Kashmir as a bride. Her husband is a habitual drinker and largely spent all his earnings on liquor and drugs.

“I do not wish to see my parents or go back to them. They married me off to a person who was double the age of mine and sent me to a place about which I knew nothing, not even the language,” Naseema said.

Human trafficking is a $32 billion industry worldwide and agents like Shabnum are making a flourishing business by buying and selling girls to Kashmiri men who cannot find a match in the Valley.

India’s West Bengal state – which shares a porous border with Bangladesh and Nepal, is one of the hubs of human trafficking. There is a stout human trafficking connection between West Bengal and Kashmir, where families need brides for their sons who are either disabled or do not find local match to marry off their sons.

There is no check on the illegal buying and selling of young girls brought into the Valley as domestic workers and later sold as brides, neither there is any policy in place. Hence, this business is thriving with every passing day.

According to the latest (2016-2017) data by National Crime Record Bureau, there are zero cases of trafficking reported in the state of Jammu & Kashmir.

“We are not able to do anything until and unless a case will not be reported to us. There are agencies registered with us who supply domestic helpers to families in Srinagar and other parts of the state but, till now, no complaint of trafficking has been reported to us,” said Deputy Superintendent Farooq Ahmad. 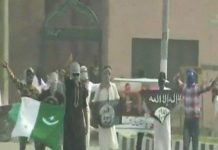