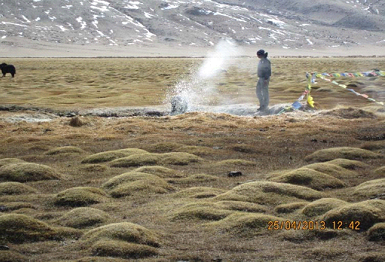 The  Department of Science and Technology has set up a demonstration project on space heating using geothermal energy at a local café in Ladakh. While the temperature dips to minus 15 degrees outside, thanks to the nearby hot spring it remains a cosy 20 degrees inside the cafe. A report by Raj Machhan

These days residents of Chumathang, a village located on the banks of river Indus near the Indo-China border in Leh district of the Union Territory of Ladakh, flock to a local café to keep themselves warm. The temperatures outside often plummet to as low as minus 15 degrees, but thanks to the nearby hot spring it remains a cosy 20 degrees inside.

The relative comfort of the villagers has been made possible by a Demonstration Project on Space Heating using Geothermal Energy. The project is funded by the Union Government’s Department of Science and Technology with technical inputs from Geological Survey of Iceland (ISOR), Norwegian Geotechnical Institute (NGI), Wadia Institute of Himalayan Geology, Dehradun, and National Institute of Technology, Hamirpur.

Says Rajeshwar Banshtu, Principal Investigator from NIT Hamirpur, “We started work on the demo in 2015 and it was ready by 2017. It has cost us about Rs 40 lakhs to put the system in place and to maintain it.” The equipment for the demonstration project has been sourced free of cost from Norway and Iceland under the Indo-Norwegian co-operation project. Scientists from the two countries visited Ladakh and chose Chumathang as the most suitable spot.

Apart from space heating, Geothermal energy is a major source of electricity. Worldwide it produces 18 Gigawatts of electric power, accounting for 30 per cent of total energy requirements in countries like Iceland. Says Bhoop Singh, Director (retd), Department of Science and Technology, “Geothermal energy has huge scope in India as well. It is clean energy. In Chumathang, we found water temperature close to boiling point. We set up the demonstration project and it has been a good success, it is still functional. If you look at the geothermal map of India, you will find plenty of places with massive potential for electricity generation.”

How is geothermal energy utilized for heating closed spaces? The technology involved is fairly simple. The space heating system has a Heat Exchanger, located inside a small pumping station, as its main component. It acts much like the radiator in an automobile. Water (average temperature on-site at Chumathang is 78 degree Celsius) is pumped to the exchanger from the hot spring located nearby. The heat exchanger is connected to the café through a closed loop, leak proof, insulated pipe. The system has a special fluid, which is heated by the exchanger. The fluid is circulated through the closed loop pipe into the restaurant and back to the heat exchanger. It is stored in a container in the café complex to maintain its circulating volume.

The system has striking similarities with the temperature mechanism of an automobile, but in reverse. The coolant in a vehicle cools the radiator whereas the heating fluid in the geothermal system heats up the space where it flows. The café has two heat radiators connected to the pipe to transmit the heat within the space.

Much of the Union Territory of Ladakh is a cold desert. On an average, Chumathang gets electric supply only for four hours a day during winters (October to March) from a diesel generator. Often the village has to go without electricity for days on end. Sourcing electricity for the pumping station was one of the challenges faced by the scientists. The problem was overcome by harnessing solar energy, which is available in abundance in Ladakh. Scientists have installed 24 solar panels, each with a capacity to generate 100 Watts of electricity, to meet the power requirements of the pumping station. Says café owner Zodpa, “My business has flourished since I agreed to put the system in place. Earlier, I owned just the café, but now I have built up two more floors for hotel rooms.” 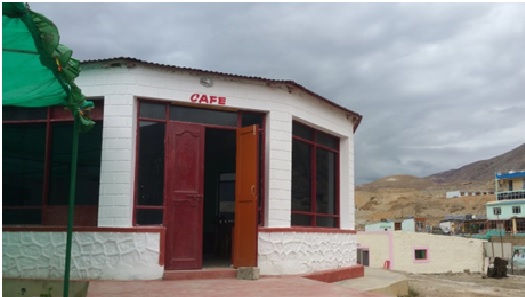 Due to heavy snowfall, presently, Ladakh remains cut off for long periods from rest of the country during the winters. It has a population of 2.74 lakh with a heavy Army presence owing to places like Drass and Kargil in its territory. The extreme winter temperatures often drop to minus 30 degree Celsius in Leh district. Geothermal energy could be the answer to its power needs. Says CP Dorjay, a geologist who resides in Leh, “Of late the electricity station at Leh has been connected to the Northern Grid, so we do get power on normal days in the town. But the conditions are bad in the interiors, where people have to depend on materials like wood and cow dung to stay warm.”

Presently, most of region uses diesel, kerosene, and other locally available material to meet its power requirements for electricity and space heating. As per a report by D Chandrasekhram and Varun Chandrasekhar of IIT, Mumbai, Ladkah uses 50,000 liters of diesel per day to run generators to produce 17 MWe, which costs 2.92 billion rupees annually (as per current price of diesel) to the Indian exchequer. The total demand for electricity in Ladakh is 53 MW. The cost of diesel in Leh is twice that of Chandigarh as the fuel is generally airlifted from Chandigarh and Delhi in winters. Generators remain the only source of electricity. The report states that unlike solar and wind energy, geothermal energy is available 24×7, 365 days per year. It emits 80% less greenhouse gases compared to coal and oil and is not affected by adverse weather conditions. A rough estimate shows that 28000 metric tones of CO2/ MWhr are generated from the diesel generators. The effect of CO2 on the glaciers in the Himalayan region is already felt with most of the glaciers receding at an alarming rate. Compared to conventional energy, the geothermal version saves about 80% fuel cost and 8% operational cost in applications such as food processing and greenhouse cultivation.

Ladakh falls in the Himalayan Geothermal Belt. The UT has three major geothermal sites at Puga, Chumathang and Nubra. Banshtu says that as per scientific estimates the geothermal field at Puga alone could sustain a 20 MW power plant at current available depth of 250 meters. Demonstration projects such as the one at Chumathang could be scaled up to provide space heating to the village and the Army establishment nearby.

With the growing population and an increased inflow of tourists, the energy needs of Ladakh could see a sharp upswing in the future. Scientists say that Geothermal energy is the most suitable and sustainable source to meet the demand. Apart from protecting the pristine environment, it could give a fillip to the socio-economic conditions of the region.

Challenges, however, remain. The cost of production of geothermal electricity is high. It costs Rs 40 crores to produce 1 MW if the site needs to be drilled more than 200 meters, though this is bound to decrease substantially as more projects are implemented. Then again, the technology and equipment for the large scale projects needs to be sourced from the western countries, which further adds to the costs. Private initiatives to generate electricity from geothermal energy have not been successful. In 2005, GeoSyndicate Power Private Ltd planned to set up 50 MWe power plant in Puga for generating power as also set up systems for direct applications like greenhouse cultivation and space heating. But nothing came of it. Unlike solar power, geothermal energy is presently not on government priority list. Says Bhoop Singh, “I approached the then Army commander to utilize the freely available resource for space heating, but he chose to stick to the status quo and refused citing budget constraints and the lack of provision for such projects.” Scientists hope that the scenario may change down the line as the advantages become too obvious to ignore.

Just like Ladakh, Himachal Pradesh too has abundant sources of geothermal energy on rivers Alaknanda, Beas, Bhagirathi and Sutlej (Tattapani) among other places. It remains up to the state government to make the most of it.

Worrying signs emerge of a link between Covid, vaccine and heart...