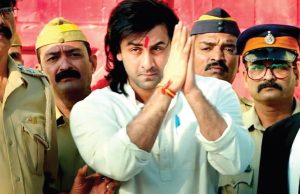 According to the reports, Abu Salem’s lawyer has sent a legal notice to Director Raj Kumar Hirani, producer Vidhu Vinod Chopra, and the distributors of the movie ‘Sanju’.

In the notice, Salem also threatened the makers of Sanju movie with defamation case, if the scenes are not deleted within a period of 15 days.

The notice refers to a scene which was purportedly false, where Ranbir Kapoor (pictured as Sanjay Dutt) agrees on owning the arms and bullets in the year 1993 when the country was going through communal tension.

According to Salem’s lawyer, the above scene is defaming his client, as Salem never met Sanjay Dutt and did not supply arms and ammunition in the year 1993.

The gangster is serving a life sentence in jail after being found guilty in the 1993 Mumbai blasts.