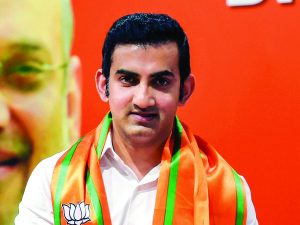 It seems raking up Kashmir and reacting to the developments in the state or statements of its leaders has become the favourite pastime of the cricketer-turned politician Gautam Gambhir. Soon after joining the BJP, his Twitter spat with the major J&K leaders Omar Abdullah and Mehbooba  Mufti has brought him a generous media attention, an incentive, perhaps, for him to tweet and talk more about the state.

Gambhir’s latest brush with Kashmir began with his response to Omar’s demand for restoration of the posts of ‘Wazir-e-Azam’ (Prime Minister) and “Sadr-e-Riyasat” (President) for J&K. Former J&K Chief Minister said it in the context of the BJP’s policy to revoke Article 370 and Article 35A which grant the state special position under India’s constitution and the power to define citizenship laws respectively.

Omar tweeted back: “Gautam, I never played much cricket because I knew I wasn’t very good at it. You don’t know very much about J&K, it’s history or the role of @jknc_ in shaping that history yet you insist on displaying that ignorance for all to see. Stick to stuff you know about, tweet about the IPL.”

Gambhir wasn’t  discouraged. He followed the argument with Omar up with Mehbooba over her tweet that India’s constitution would no longer apply to J&K if Article 370 were to be scrapped. She also warned that all Indians will have to pay for the BJP’s folly of withdrawing Article 370 and Article 35A. Mehbooba’s tweet followed after a petition was filed in Delhi High Court urging the court to bar Omar and Mehbooba from participating in polls for their alleged anti-national statements.

“Why waste time in court? Wait for the BJP to scrap Article 370. It will automatically debar us from fighting elections since the Indian constitution won’t be applicable to Jammu and Kashmir anymore,” she tweeted in response, adding: “Na samjhogay tho mit jaoge, aye Hindustan walo. Tumhari dastaan tak bhi na hogi dastaano mein (O people of India, you will be erased if you do not understand. Even your tales won’t be written in history)

In response, Gambhir  retorted saying “This is India not a blot like you that it will disappear”. This drew sharp reaction from Mehbooba who blocked him on Twitter.

Ever since, Gambhir also visited J&K to campaign  for the BJP and in his speeches too, he took on Omar and Mehbooba. Addressing a rally at Udhampur, Gambhir once again slammed Mehbooba for her “anti-national remarks”.

“Mehbooba Mufti blocked me on Twitter but how will she block 125 crore patriots. Her dream to break India will not be successful,” Gambhir said while talking to reporters after addressing an election rally here.

He also slammed Omar. However Gambhir’s Kashmir fixation is not new. Earlier too, he has sparred with people over Kashmir and reacted controversially to the developments in the state.  In April 2017 he called for mass murder in Kashmir in retaliation for the heckling of the CRPF jawans by a group of Kashmiri youth, whose video had gone viral.

Gambhir had then tweeted, “For every slap on my army’s Jawan lay down at least a 100 jihadi lives. Whoever wants Azadi LEAVE NOW! Kashmir is ours. #kashmirbelongs2us”

Last year, Gambhir had slammed Pakistani cricketer Shahid Afridi following his tweet on Kashmir saying that Afridi “is, as usual, celebrating a dismissal off a no-ball”. Pakistani cricketer, in a tweet, had condemned the then killings in Kashmir  and had urged the UN to intervene to stop the bloodshed. 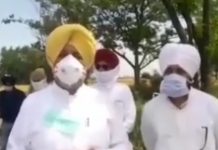