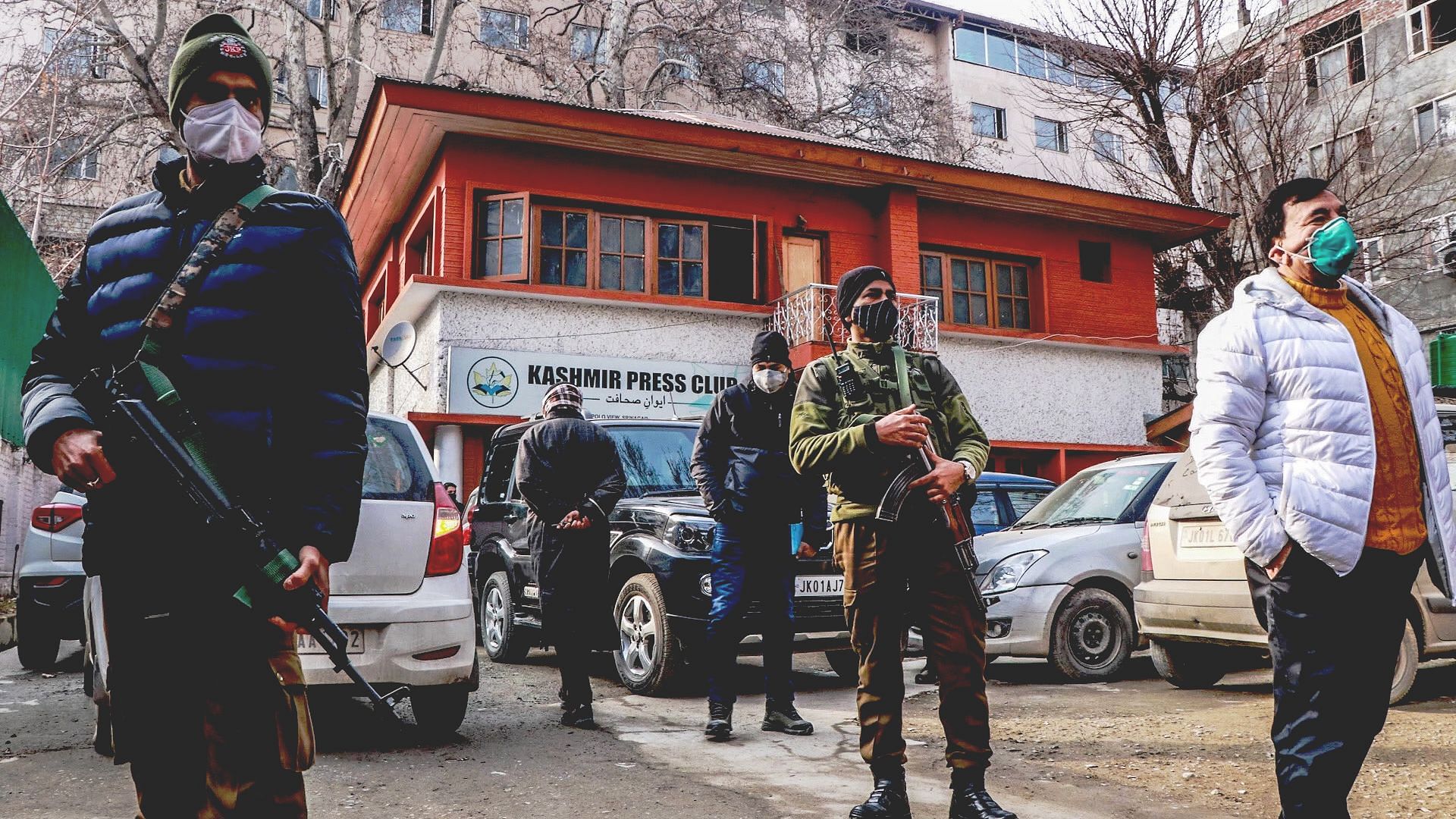 After a futile attempt by a goverment-backed group of journalists to foist a self-styled interim body on the KPC, which had ceased to exist as registered body following dealy in re-registration of the club, the journalist organizations have resolved to explore all avenues for restoration of the club at the earliest. A report by Riyaz Wani

The journalists in Kashmir were busy preparing for the fresh elections when on January 15, a group of journalists headed by Kashmir correspondent of Times of India Salim Pandit stormed Kashmir Press Club, accompanied by a posse of policemen,  and announced themselves as the interim body of the club. Pandit said that the body would work to organize elections which had been delayed by almost six months after the government withheld re-registration of the club.

Later in a press release, the self-styled interim body in an emailed press release said that the delay in elections had put “media fraternity to unwanted trouble”.

“The interim body besides running the day-to-day affairs of the Club,  will also be authorized to form a required executive body which will help the KPC to flourish and grow into a modern press club much in need with the growing requirements,” the press release said.

But there was soon massive backlash against the decision with almost all journalist organizations registered with the club resisting “the arbitrary move”.  And they were supported in this by Press Council of India, Delhi Press Club,  Mumbai Press Club, other major national clubs besides international media organizations like Committee for Protection of Journalists,  International Journalists Federation and Reporters Without Borders.

This encouraged the journalist organizations to form a new interim body which had a member from each of them in its ranks.

Following day, the J&K administration put on hold the re-registration of the Club and took control of the premises, citing a “potential law and order situation.”

“The factual position is that KPC as a registered body has ceased to exist and its managing body too has come to a legal closure on 14 July 2021, the date on which its tenure came to an end,” the government release said.

The elected body of the Kashmir Press Club said the design of the government was to shut down the club and “stifle the voice of journalists in Kashmir”.

But there is a big question mark over how the government will respond. The two-year term of the last elected body ended on July 15, 2021 following which new elections were expected to be held. But the government had already asked the club, a registered body, to seek re-registration under the central Societies of Registration Act, saying it was necessary to do so following the abrogation of Article 370. While the club applied for re-registration in the first week of May 2021 and the Registrar of Societies issued it on December 29, a fortnight later, on January 14, it was put in “abeyance”, citing a report from the J&K Police’s Criminal Investigation Department. Pandit formed his interim body on the following day.

For now, the club is closed and the government is in no mood to review its decision. The government approach towards press club is seen of a piece with its suppression of the local papers.  The government has already stopped advertisements to several local newspapers to reign them in, even though no formal orders have been issued to this effect.    This has come as a crippling blow to the papers already reeling from a denial of central government adverts. More so, in the case of Greater Kashmir, one of J&K’s largest newspapers. Similarly, ads have been withheld to other major newspapers like Kashmir Reader, Kashmir Life and Kashmir Images.

The message, as a result, has gone across to all newspapers. The local newspapers became indistinguishable from a public relations arm of the state government.  The space for content that goes against the official narrative has progressively narrowed. There is no scope for in-depth, investigative reports or the ones that objectively reflect the ground situation.

And as if the existing unfavorable climate for the media in Kashmir wasn’t bad enough, J&K Government in 2020 came up with a new media policy that gives it powers to decide what is fake, unethical and anti-national news. And if it finds  any journalist or media organization culpable on these counts, it takes legal action against the journalist or media organisation concerned including stopping government advertisements.

These actions are not new.  Many such actions have been undertaken over the last two years. Journalists have complained of being called to police stations over a story not deemed factually right. Sometimes they have also complained of being questioned over their social media posts.  In some cases, FIRs have also been filed over the news stories and the social media comments. The government’s rationale for the policy is “the significant law and order and security considerations”, making it “extremely important that the efforts of anti-social and anti-national elements to disturb peace are thwarted.” The new policy has made mandatory a background check of newspaper publishers, editors and key staff before empanelling them for government advertisements, apart from security clearance before a journalist is given accreditation.

The media in Kashmir, comprising an English, vernacular press and online sites, have a particularly unenviable job to do. The problems faced by it are both universal to the conflict situations and unique to the union territory.  It is hobbled by the dearth of advertising resources and the dependence on government advertisements. Now the government has made it further difficult by first taming the local newspapers and now trying to force the journalists working for various national and international publications to fall in line. Closure of press club is an attempt to do so.

“It seems the ultimate goal was to shut down the Kashmir Press Club and for this purpose, they tried to install a group of journalists. By this action, they wanted to stifle the voice of journalists that resonated through the forum called Kashmir Press Club, the only democratic and independent journalist body in Valley,” Ishfaq Tantray, general secretary of the ousted body, said in a statement.

“But it is our firm belief that our journalists are capable and professional enough to keep the flame glowing and confront these challenges ahead. I want to reiterate that journalism thrived in Kashmir and it will survive all crests and troughs in the future as well,” he added.

For now, the bid by the government-backed interim body to take over the functioning of the Kashmir Press Club has been foiled by a collective resistance by the journalist organizations. And the government is not ready to hand over the club to the journalists other than the ones it considers friendly to its interests.