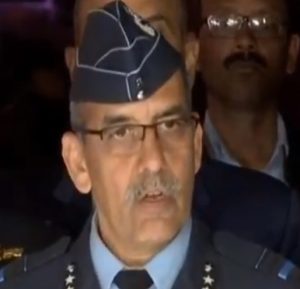 Indian Air Force, Army and Navy in a joint conference on Thursday debunked Pakistan’s claim that F-16s were not used in the strike; IAF showed parts of AMRAAM, air to air missile which is carried only on the Pakistani F-16s as evidence.

Air Vice Marshal RGK Kapoor said that “Pakistan breached Indian airspace on 27th February and PAF’s dropped bombs on the Indian army formation compound; no significant damages were observed. There is enough evidence to show that F-16s were used in this mission through the electronic signatures,” he added.

“We continue to maintain strict vigil along both the LOC and International Border. Our ground-based air defence weapon systems are put on high alert. I wish to assure the nation that we are fully prepared and in a heightened state of readiness,” Maj Gen Surinder Singh Mahal of the Indian Army said in the conference.

Rear Admiral Dalbir Singh Gujral in the briefing said, “The Indian Navy is deployed in a high state of readiness and remains poised in all three dimensions; on the surface, undersea and in the air to deter, prevent and defeat any misadventure by Pakistan in the maritime domain.”