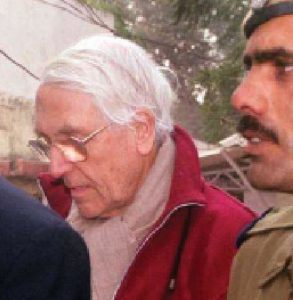 The Rolf Gauffin matter is getting curiouser and curiouser. The Asian Age’s headline had said that Rolf Gauffin escaped from Tihar jail. According to the Inspector General of Police, Jails, Ajay Agarwal IPS, Gauffin did not escape from Tihar but from India. Agarwal said that Gauffin was released after his getting a bail order on April 18 this year from V K Agarwal,

Gauffin on the other hand has said in an interview published in Stockholm’s top newspaper Dagens Nyheter that he had escaped from Delhi’s Tihar Jail after bribing the authorities a sum equivalent to SEK 500,000 equivalent to 20 lakhs. The jail authorities are very categorical in that Gauffin’s release by them after he had secured the bail order was perfectly in order. So who was paid the money, if at all it was?

Now the matter gets more interesting. According to secret order no. 35931 dated September 20, 1996 the jail authorities are required in inform the concerned Foreigners Regional Registration Officer (FRRO) about any foreigner being released so as “to ensure that the foreigner leaves India after obtaining Exit Permission.” The order goes on to add that this was to expressly preclude foreigner’s accused of criminal offences from fleeing the country to evade prosecution. Agarwal has confirmed that Gauffin’s release was intimated to the FRRO as required by the secret MHA order. The FRRO is under the control of the Intelligence Bureau, which probably accounts for the laxity in allowing Gauffin and his wife, Jeanne, to flee.

Rolf Gauffin and Jeanne were arrested on December 7, 2001, on their 39th visit to India in a decade, while they were attempting to board a flight to Singapore. Foreign currency amounting to 5.01 crores was seized from their personal baggage. They were charged under sections 132 and 135 of the Indian Customs Act and were remanded to judicial custody the next day. On January31, 2002, they were detained under COFEPOSA but on March 22 the Advisory Board consisting of judges of the High Court squashed the DRI’s detention order and ordered their immediate release.

However they continued to be held for charges under the Customs Act. VK Maheshwari’s bail order was contingent on furnishing a personal surety of 10 lakhs and a bank guarantee of 10 lakhs, and after the couple confirmed that their diplomatic passports were surrendered to the DRI. The fact is that the passport, as it was a diplomatic one, was as per standard procedure handed over to the Swedish embassy in New Delhi for safekeeping.

Delhi Police officials are quite categorical that if any lapse has happened then the FRRO must be held responsible for it. In either case both these departments come under the Home Ministry under Lal Krishna Advani who has since 1998 being trying to provide the country with “Su-raaj” and “Suraksha” with indifferent success. As the Deputy PM was not immediately available for a comment his personal staff suggested that the Home Secretary be contacted. The Home Secretary was also not available and even if so would hardly have been in a better position to comment when the lapses are so apparent.

But the MEA has been more forthcoming. Officials accept that they were aware of Gauffin’s interview and the nature of his comments in the Swedish press. The Indian embassy in Stockholm had kept the ministry advised about Gauffin’s activities. Yet the MEA did not seek his extradition, as there was “no request for the same.”

An official in the Department of Revenue, however, has confirmed that the Finance Ministry, then headed by Yashwant Sinha had asked the MEA, then headed by Rolf Gauffin’s friend Jaswant Singh to move for Gauffin’s extradition. Now that Jaswant Singh is the Finance Minister and the ultimate boss of the DRI, will he ask the MEA, his former charge, for the extradition of the two Gauffins? In case the Swedish government doesn’t know Rolf and Jeanne Gauffin are holed up in his holiday home on the Baltic Sea island of Oland.