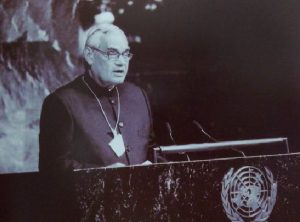 Prime Minister Atal Behari Vajpayee’s address to the UN General Assembly in New York and his earlier meeting with US President George W Bush on the sidelines of the UN General Assembly has only served to bring back into sharp focus the pro-United States of America tilt and the Pakistan-centric foreign policy of the Vajpayee establishment.

The Vajpayee establishment impressed upon the Bush Administration the “disconnect” between the promises made by Pakistan President Pervez Musharraf on the issue of terrorism to the international community and the on-implementation so far. It was pointed out to the US that the Vajpayee Government was prepared for a dialogue with Pakistan but wanted an end to cross-border terrorism.

The problem of Prime Minister Vajpayee is that while it is convinced that the United States is itself heavily leaning towards Pakistan, it is neither able to show its discomfiture to the US, nor is it in a position to get the US to rein in Pakistan. BJP General Secretary and former Union Law Minister Arun Jaitley did admit that the United States has not done enough to restrain Pakistan. But, the BJP establishment cannot go beyond to tell the United States that it was pushing to the forefront Pakistan, “which is the epicentre of global terrorism,” as Arun Jaitley put it.

The Vajpayee establishment has been able to freely tongue-lash Pakistan on its double-standards of supporting the campaign against terror on its eastern borders with Afghanistan but encouraged cross-border terrorism on its Western borders with India. But, the Vajpayee establishment was tongue-tied in dealing with the double-standards of the United States, which declared war against terrorism, when the World Trade Centre Towers were attacked in New York on 9/11, but refused to take any action when similar terrorist attack took place on Indian Parliament on 12/13.

Prime Minister Atal Behari Vajpayee has just managed to end up with a four-year record of constant complaining to the United States over the continuing menace of cross-border terrorism from Pakistan and wallowing in self-pity that India is the biggest victim of international terrorism. With a Pakistan-centric approach to a heavily pro-US tilt in the foreign policy, the Vajpayee establishment finds itself in a mess. Clearly, the policy-makers and leading lights of the Vajpayee establishment are looking to some way out of the mess created as a result of the policies it has been pursuing in the past four years.

Starting on a high note, the Vajpayee establishment demanded declaring Pakistan a terrorist State. Far from that, Pakistan emerged as a frontline State in the US-led campaign against global terror.

Isolated in the international community, with Pakistan walking away with international honours, the Vajpayee establishment has since started pleading with the United States to counsel restraint to Pakistan. That created the elbow space for the United States to dabble in the India-Pakistan affairs. The policy-makers of the Vajpayee establishment seem to hail even that as a major initiative

Clearly, the Vajpayee Government could not logically carry the blame to the doorstep of the US. At best, the Vajpayee establishment can only blame the US by proxy by openly attacking Pakistan.