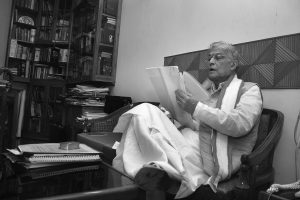 I am surprised at the circular of the University Grants Commission (UGC) (under your ministry, HRD (human resources development)) to introduce courses on Astrology, Vedic Mathematics, training of purohits and spoken Sanskrit at the universities. I should not have been surprised, for myth is more important than historical facts for you. Your presence at Ayodhya on December 6, 1992, was proof enough of your zeal to construct the Ram temple by destroying the Babri mosque. I am sure you must have received a congratulatory (confidential) telegram from the Taliban for such heroic work. I am happy that though science has corrupted many of us into treating Astrology as non-science, even the study of physics has miserably failed to change your “swadeshi” thoughts. Raman, Ramanujan, Bhabha and many others would be very unhappy to have missed the pearls of wisdom of your beliefs. Moreover, the grammar and composition of the circular is probably the UGC’s revenge on the English language for centuries of British rule.

In view of the above, I have some suggestions. Since our prime minister is a firm believer of sarva dharma sambhav (secularism of the Sangh Parivar variety), courses on contributions of the minority communities should also be included in the next circular of the UGC. As an example, at least Diploma courses on circumcision and burial/cremation rituals, with emphasis on practical demonstrations (film shows on the burning of Graham Stuart Staines and his sons would be useful knowledge), should be included. Study and practice of sati must be made compulsory at all women’s colleges. Research must be encouraged to find out the male equivalent of sati.

The suggestion of training purohits, due to the market demand in the United States is a very bright idea. Since there is not enough market demand to study Ghalib, Tagore, Newton’s mechanics, Relativity or Genetics, UGC grants from these disciplines should be diverted for the abovementioned exciting new courses. However, there would be a minor problem if schedule castes/schedule tribes (SC/ST) students apply for training as purohits. This can be easily solved as the constitution review committee is looking into similar problems. The present government is fortunately very nationalistic, that is why we support the NMD (National Missile Defence) idea of US President George W Bush. Since the NMD is designed to save the US from any nuclear attack (the only country with any experience of using nuclear bombs), our support shows how much we care about humanity.

Astrology is very useful for the nation. The medical council of India can be easily persuaded to see that before any patient is treated at a hospital, an astrological prediction certificate is compulsorily obtained. This would save unnecessary wastage of the doctor’s time, and expenditure on medication, in a large number of cases. Readymade hawans should be made easily available in all drug shops. To eliminate corruption, examinations and elections should be abolished, as their outcome can be easily announced from centres of excellence in Astrology, established on the lines of BARC (Bhaba Atomic Research Centre), TIFR (Tata Institute of Fundamental Research), SINP (Saha Institute of Nuclear Physics) etc. Further, Abdul Kalam should be persecuted for wasting national resources in developing missiles, as many serials on Doordarshan show that much more effective missiles were common in Vedic era. Research must be done at the DRDO (Defence Research and Development Organisation) to unearth the techniques used to manufacture those missiles.

An important area where efforts should be made is the export the potential of these rediscovered ancient sciences. As a first step, all ministers should be advised to take an Astrologer as part of the official delegation on their frequent foreign trips (I am sure many conscientious ministers do that already). A big stall should be made compulsory at “India Exhibitions” that are frequently held at Paris, London, New York and Tokyo to promote Astrology. Do not worry about discussion in Parliament. One can always reconstruct the past using time machines. History should be rewritten to be convenient now.

Anyone who does not agree with you is anti-national and with the terrorists; kindly smoke them out using the Prevention of Terrorism Ordinance (POTO).

I hope that the circular from UGC is only the tip of the iceberg, and that we will leave the Taliban far behind with ease in our giant leap backwards.

When the Golden era (the National Democratic Alliance (NDA) government) started with the changes in Social Science books, we kept quite and did not express our anguish:

First they came for the communists,

I did not speak because I was not a communist;

Then they came for the artists,

I did not speak because I was not an artist;

Then they came for the Jews,

I did not speak because I was not a Jew;

Then they came for me;

And there was no one left to speak for me.