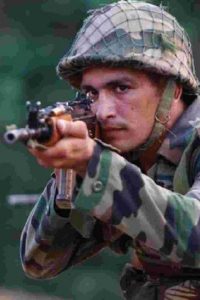 Operation Poorna Vijay was concluded “successfully” on May 10, a day before the third anniversary of the historic Pokhran II nuclear tests. After three years of loudly announcing its ambition to be accepted as a nuclear weapon country, India marked this transition by conducting war exercises in a simulated backdrop of a nuclear conflict.

These war games were intended to test the capability of its land, air and sea forces in a scenario where India has already come under attack by weapons of mass destruction-chemical, biological or nuclear. This exercise will provide valuable results for battlefield commanders and tacticians in the Army Headquarters and warfare schools across the country.

The exercises were conducted keeping in mind Pakistan’s refusal to sign a compact on “no-first use” of nuclear weapons. Therefore, the results of Operation Poorna Vijay will be closely scrutinised to fill the gap in launching offensive operations after India has come under nuclear attack. Since India has already declared its preference for a “no first use” policy, the strategic planners in the Indian military were visualising a scenario in which it has come under a surprise nuclear attack.

The calculation, therefore, is not only to maintain a credible second strike capability (variously called minimum nuclear deterrent or credible nuclear deterrent), but also to ensure that India’s strategic forces (nuclear forces) preserve their capability, power and means to retaliate. In conjunction with this, the ground attack troops, backed by incisive air operations, should be in a position to totally overwhelm the enemy. Hence the codename “Operation Poorna Vijay”.

Simply put, a war in a nuclear scenario cannot be longdrawn. There has to be a quick, effective and devastating response to smother the enemy’s defensive and offensive capabilities. During the Kargil operation, India had refused to cross the Line of Control (LoC). Observers had explained this deference to the LoC as India’s acceptance of the fact that any escalation of conventional conflict might result in the usage of nuclear weapons as the “weapon of last resort.”

Considering the fact that both India and Pakistan were new kids on the nuclear block with no
effective command and control of their strategic forces, and with no checks and balances and a system of “alerts” to control the launching of nuclear weapons, the world community was concerned at the potential of a nuclear war.

Such a scenario had made the Indian leadership and military circumspect and unwilling to escalate the Kargil conflict. This scenario still exists (see Nuclear command-and-control: chaos on the subcontinent).

What has changed is India’s relations with the West, especially the USA. Back in May 1998, USA had slammed sanctions on India for its nuclear tests. Today, India is a supporter (the first) of the US Nuclear Missile Defence Plan. The US is expected to lift the sanctions in due course.