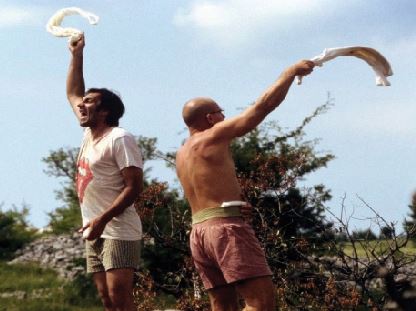 Someone somewhere in the run up to this year’s Academy Awards said that 80 per cent failure rate was expected. So, while Ashutosh Gowariker’s Lagaan did not make the grade, we can take succour in the fact that neither did, Jean-Pierre Jeunet’s Amelie. Instead, the Oscar for the Best Foreign Language Film went to Danis Tanovic’s No Man’s Land a low budget film from war-ravaged Bosnia- Herzegovina.

The award to Tanovic makes mockery of the postulations that raved incessantly about Amelie’s chances: of its worldwide gross of $ 134 million, its irresistible charm and sense of humorous redemption in the backdrop of September 11 attack on New York. Obviously, none of these aspects played on the minds of the jury (drawn from such countries as Australia, France and Italy) that decided in favour of No Man’s Land.

Serious art-house cinema with equally serious cause is what the motley band of Academy’s voters wants to be seen as promoting, particularly in the foreign language segment. A premise that has not changed since Italian master Frederico Fellini was awarded the first ever Oscar in this category for La Strada in 1956.

Tanovic’s film in that sense fits the bill. It is, as one critic pointed out, a ‘no man’s film’ having been co-produced by five nations (France, Italy, Belgium, UK and Slovania) and is, if spade be called a spade, a conscientious tribute to lives scarred by 20th century ethnic war in their own backyard. No other film, at least none of the nominees this year could have held a mirror to the context, content and realism of the Bosnian army’s ex-cameraman, Danis Tanovic’s ode to his aching motherland.

So, don’t shed any tears for Lagaan’s eleven. The farcical story of British oppression was clearly at odds with demands of the category.

Political correctness came to the fore at Kodak Theatre in Los Angeles this year with maximum limelight being hogged by Hollywood’s black actors. Coming as it does 39 years after Sidney Poitier was honoured with the Best Actor’s award for his performance in Lilies of the Field, Denzel Washington and Halle Berry’s recognition as Best Actor and Actress would surely stand out as one of the most momentous events of the Academy’s 74-year-long history. Berry’s tears, in the given circumstances, constitute a befitting response to the unbearable burden of being ignored, as a vital and vibrant part of Hollywood, for a close to four decades. “It’s been 74 years, I’ve got to take this time,” said Berry in her three-minute
acceptance speech.

Ironically, the recognition comes the same year Sidney Poitier has been honoured with a lifetime achievement award for his contribution to cinema as actor and director. While for Halle Berry the award has come rather early in the career, Washington has been robbed of the statuette on at least two earlier occasions (in 1999 for his stupendous performance in Hurricane and in 1996 for the moving portrayal of a controversial black leader in Malcolm X), to name the most obvious. One of the most recognizable faces of Hollywood, Washington’s probably, the best known and the most loved black actor after Sidney Poitier. A fact that did not escape the actor who remarked, “Forty years I’ve been chasing Sidney. They finally give it to me, and they give it to him the same night!”

It is sad therefore that the honour has come at a price. In the run up to the D-day the media went into overdrive by highlighting the plight of black actors on one hand and criticising Ron Howard’s A Beautiful Mind based on the life of Nobel Laureate John Nash as inaccurate. Whether the difficult atmosphere orchestrated by vested interests (read distributors hand-in-glove with gossip media) had its bearing on the final outcome is difficult to judge. But one cannot rule out the tremendous pressure under which the Academy’s judges voted.

Denzel Washington’s face bore that disgust as he made his way to the Kodak Theatre earlier today. Asked by a television reporter of what he thought of the whole affair, the actor smirked saying he had nothing to say on the matter. Crowe similarly bore an impassive expression. In the final take, it was left to Whoopi Goldberg to surmise the circumstances as she took the podium at Kodak Theatre, “So much mud has been raked in the past few weeks that now all nominees are black!”

Emotions run high on such occasions, so does the irony.