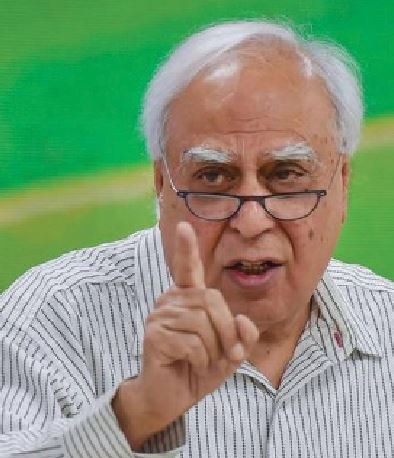 Senior Congress member of the Rajya Sabha, Kapil Sibal, who had moved the statutory resolution disapproving the disputatious Prevention of Terrorism Ordinance (POTO) that was carried by the Upper House and led to a Joint Sitting of Parliament, spells out his specific and substantive objections against the POTO. Articulate as ever, Sibal says that the Congress is protesting the ordinance despite having been responsible for instituting its much-reviled predecessor, the Terrorism and Disruptive Activities (Prevention) Act (TADA). Sibal says that when the Congress had seen the misuses the TADA could be put to, the party had let it lapse.

The Bharatiya Janata Party (BJP)-led Central government, unfortunately, has not learnt from the past.

Why is the Congress opposing the POTO Bill?

There can be no two opinions on the question of fighting terrorism. The Congress, which suffered the most at the hands of terrorists and terrorism, has been second to none in the fight against the terrorist menace. Two of our tallest leaders were lost, Indira Gandhi and Rajiv Gandhi. Let none teach us lessons on fighting terrorism. But what we are more concerned is at the mode and the manner in which the Vajpayee government, without regard to the sentiments of large sections of society, is pushing such a draconian piece of legislation. We tried very hard to enter into a dialogue with the Vajpayee government. The government could have consulted the Opposition and seen to it on how to go about it. But the BJP seems more set on jingoism.

Has the Congress been constructive in its criticism on POTO?

It was the Congress that had tried its hand at legislating on the question of tackling the menace of terrorism. The Vajpayee Government ought to have consulted us on the issue. Instead, it appeared to be set firmly on one-upmanship and unilaterally went about it. We had very specific and substantive objections. Far from addressing the concerns, the BJP started hurtling insinuations at us, even questioning our patriotism. Indeed, I did move an amendment to the POTO Bill in the Rajya Sabha on March 21, in which, under Rule 125 of the Rules of Business, I sought reference of the Bill to a Select Committee of the House. The purpose of this move was to add certain provisions, so that all those who perpetrate terrorism must be brought within the ambit of this Bill. But, unfortunately, this proposal was rejected
outright.

The Vajpayee government says there is a need for a legal regime to fight terrorism. How do you react to it?

The Congress did enact the Terrorist and Disruptive Activities (Prevention) Act (TADA), way back in 1995. It was allowed by the Congress government to lapse on May 23, 1995, when largescale communal bias came to light. That is why I say that we seek to learn from the past, while the NDA (National Democratic Alliance) seems bent upon unlearning from the past. How else do you explain that those now sitting on the Treasury Benches, who were once the votaries of civil liberties in the country, now seem to have made a U-turn. Previously, the TADA was totally unacceptable to BJP and its allies. Now, they project themselves as wanting to integrate the country through POTO. I do not know how the BJP position has changed now and how the POTO has become the panacea for all ills in the country. The Vajpayee government owes an explanation.

Do you feel POTO is liable to communal bias?

It is not merely our suspicion. It has been borne out by at least two specific instances. In December last year, when, for the first time, POTO was put into force in Jammu and Kashmir, the entire property of a family, which had nothing to do with terrorism, was attached. There was a public outcry. The Jammu and Kashmir Law Minister had to make a public statement. Look at the way in which the Narendra Modi government in Gujarat is using POTO on a selective basis. In a First Information Report (FIR) lodged by Sub- Inspector of Police B K Solanki of the Naroda Police Station, he named five Vishwa Hindu Parishad (VHP) and Bajrang Dal leaders for their involvement in the Naroda-Patia massacre. Three persons have so far been arrested but those named in the FIR are still at large. Forget about POTO, they have not arrested the suspects even under the ordinary law. They are still at large.