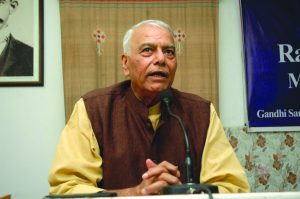 Bolstered by the positive, and even euphoric, response from industry, business, the stock market and the media for his “growth-oriented, investor-friendly, and forward-looking” Union Budget for 2001-2002, Union Finance Minister Yashwant Sinha declared post-Budget that the “government is going to privatise Public Sector Undertakings (PSUs)” and it did not matter whether they were profit- or loss-making units.

Speaking at the national seminar on the budget organised by the Federation of Indian Chambers of Commerce and Industry (FICCI), Sinha said, “The government is determined to go ahead with the privatisation of PSUs. We are prepared to take any risk to do anything which is economically correct.” It is only the strategic PSUs that will remain under the government, he said.

The finance minister was not really gloating at the euphoric response he got from all round for the Budget. The tone he adopted was an extremely sober one. He admitted that he felt a sense of enhanced responsibility, and agreed with the description of the second generation of reforms as a slippery slope. “If growth is the central theme of the budget, then negotiation of the slippery slope of the second generation of reforms is inevitable.” He told captains of industry that the reforms will succeed only if the industry contributed to the process as well and stated, “The need of the hour is harmony, not dissensions. Our politics is fractious. We tend to look at things in the very short-term.”

He said that the second generation of reforms were the most difficult ones and thought that it was for this reason that they had not been attempted so far. “We need far more stamina, far more grit and determination,” Sinha observed.

Referring to the changes made in the Industrial Disputes Act, which allowed workers to be retrenched on payment of compensation of salary for 45 days, he asked the captains of industry to be magnanimous. He told them that in the PSUs, the policy was to give 60 days’ salary in case of profit making units, and 45 days’ salary in the case of loss-making ones.

He conceded that “where job opportunities are not plenty, where lateral mobility is limited” there was need to take care of the workers. “Let not the working class become suspicious of the government and business,” he cautioned. “We are going to multiply job opportunities.”

“We have to go out and explain to the people that dereservation is not against small-scale industries (SSI),” Sinha said. He reminded that even a decade ago, Indian products made in the SSI sector were on part with those made in China, and even superior. But right now they have slipped far behind. Dereservation will make the production of these items more competitive.

‘There will be opposition on the reduction of interest rates on small savings,” he said, and explained that a subsidy element has been built into interest rates. Why should the government subsidise interest rates, he asked. Defended the imposition of user charges he said, “People really want quality service, and they are not concerned with the cost of service.” There is a responsibility on the provider of service to improve quality, he emphasised, and suggested that the issue of user charges be removed from political jurisdiction.

Rejecting criticism that he was under the influence of FICCI and business, he said: “We have to go out and explain to the people why the reforms are necessary. It is our national duty to do this. I would like to tell you that we all have to convince the people that what you are demanding and what we are responding to in the government is in the larger interests of the people. If I have set out the road map for reforms, it is this with this in mind,” he said.