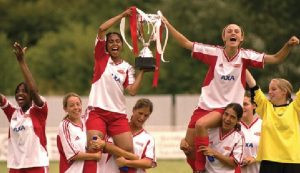 June 2002 reminds everyone of football mania that had hit everyone around the globe. And Bend It Like Beckham (BILB) has been made to cash in on that. The film is co-produced, co-written and directed by award winning filmmaker Gurinder Chadha and co-produced by Deepak Nayar who have left no stone unturned to give a ‘desi’ feel to a film shot completely in the suburbs of London.

Be it Anupam Kher as the pot-bellied, turban-clad pilot father or the elder daughter who is an airhostess and despite being an Indian, manages to agree her parents to a love marriage. But it is Parminder S Nagra outshines the entire cast as 18-year-old Jess (short for Jaspinder) Bhamra with a splendid performance as a football-crazy high school girl who dreams of playing professional football and mastering David Beckham’s ability to bend the ball around the wall. Giving her company is her English friend Keira Knightly as Jules-short for Juliette- who encourages her not to give in to her parents and continue playing football.

While her family is more interested in her getting a “good match”, Jess is more bothered about getting into the football team in America. Chadha has done exemplified work in Jess’s idolization of David Beckham, star of the England soccer team. While her family is busy preparing for the elder daughter’s marriage, Jess continues to practice her football, a talent that is recognized by Coach Joe, played to perfection by Jonathan Rhys-Meyers, who pushes her to play well because he has “high hopes for her”. However, Chadha doesn’t miss out on the love angle, in the process making Joe fall head over heels in love with Jess.

On the other hand, the film doesn’t boast of impressive sets, the only ones being the Bhamras’ residence and the football court. But despite the lack of splendor, Chadha has been able to skillfully draw out the best from her cast who play an Asian family to the hilt complete with the notorious Punjabi abuses, Indian television channels and the photograph of Guru Nanak Dev that dominates the family’s drawing room and is looked at for every promise and result.

While this British comedy carries a tag line of “Who wants to learn cooking Aloo Gobhi (potato-cabbage) when one can bend a ball like Beckham” it follows the motto of bending rules to achieve your dreams, even if that means sneaking on her parents. But the film also has its share of humour that is liberally sprinkled throughout its 112 minutes length. If it is Jules mother thinking that her daughter is homosexual, then there is Jess’s admirer Taz (Trey Farley) who acknowledges in the end, “Even though I love you, I can’t marry you as I am a homosexual”.

This also symbolizes albeit subtly, the lifestyles that have changed and the fact that today’s youth do not mind expressing their feelings and accepting that they are different. In fact, they choose to confront their parents with reality rather than lying to them and sneaking to pursue their goals that may not be in cognizance with age-old traditions.

For this is exactly what is inviting the youth who in their predictable style are preferring calling the blockbuster BILB, to see the movie that has been going to packed halls ever since its release last week. Understandably, it is the young crowd that is gushing over the film and getting all inspired by Chadha’s depiction of Jess, an otherwise ordinary-looking girl who only knows the language of the ball.

If the college crowd is sporting tracksuits, school students are on a campaign trying to convince their school authorities to introduce football as a major game in the school curriculum. While the movie is full of colour and showcases different shades of humour, frustration and humanistic feelings, it also manages to drive home the fact that British comedy cannot work without the Punjabi touch to it! Yes, this movie has something to watch out for every age group. If it is humour and morality for the young, it is the finery and the “real touch” of the Non Resident Indian (NRI) family trying to live according to established norms embellished with a “phoren (foreign)” lifestyle for the middle aged. 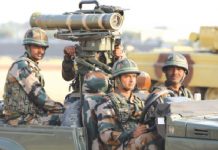