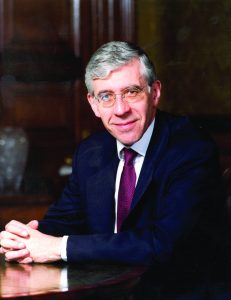 India told British Foreign Secretary Jack Straw there will no further de-escalations measures until there is a permanent end to cross-border terrorism, and Straw on his own part expressed the hope that there would be free and fair elections in Jammu and Kashmir. While appreciating the human rights mechanisms in India, Straw also expressed concern over the rights situation in the troubled state.

Straw told journalists after his meeting with Minister for External Affairs Yashwant Sinha that he looked forward to working with “Yashwant”, and paid tribute to “Jaswant” for the wonderful rapport he had with the former foreign minister.

There is apparently a hardening of stance on both sides, and this was reflected in Straw’s sombre assessment of the situation. “There is reduction in tension, but the situation on the Line Of Control (LOC) remains difficult,” he said, and refused to further elaborate on the word “difficult”.

Straw will be in Islamabad on Saturday, and return to Delhi in the night before flying back to London. He said that he would be meeting Sinha on his return. He was quite clear that he was not carrying any message from New Delhi to Islamabad. He described his interaction with the two sides as “independent consultations”.

Asked to respond about the Indian demand that Pakistan be declared a “terrorist state”, Straw said that the anti-terrorist legislation he had drafted while he was the home secretary defined terrorism in terms of individuals and groups, and did not include states. And he mentioned that Britain had banned several terrorist organizations including Babbar Khalsa, Lashkar-E-Toiba (LeT) and Jaish-E-Mohammed (JeM).

Straw sounded hopeful and optimistic about Pakistan President Pervez Musharraf’s ability to deal with the terrorist groups in Pakistan, and he refused to say whether Pakistan has done anything credible so far to check cross-border terrorism.

He also refused to comment on Musharraf’s new proposals which entails the army retaining a key role in the future democratic set up. He said that the holding of local elections was a positive thing, and that he was waiting for the elections to be held at the national level.

He had also announced a 600,000 pound collaboration between top Indian and British scientists.

Sinha, who arrived at the hotel where the Straw press conference was scheduled to be held, that he had a long discussion with his British counterpart, and that he (Sinha) had a lot say, though he did not divulge the many things he had told Straw.

Earlier in the day, when Straw met National Security Adviser and Principal Secretary to the Prime Minister Brajesh Mishra, it was disclosed that they discussed India-UK bilateral relations, apart from the situation in the region.

It seems that Straw does not enjoy the same rapport with either Sinha or Mishra that he had with Singh, and both sides may have to work a little harder than before to keep the dialogue on an even keel because the differences in perceptions are likely to be more prominent than in the first flush of anti-terror bonhomie in the days after September 11, 2001.