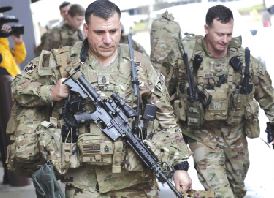 There is a post -Clausewitzian military axiom that says that no longer is a war won on the battlefield with men and materiel: it is won when the victor successfully imposes his ideology on the vanquished. And that is a more enduring and fulfilling victory.

America’s wipeout ideological conquest of the subcontinent required inputs from various fronts: the first prong was globalisation and pro-US acculturation — this is already so firmly in place that much of urban India is today really wannabe Little America; the second prong was getting the Indian government to do the US’ military bidding pronto and without protest — and this the Bush Administration accomplished yesterday by getting the Prime Minister’s Office (PMO) to summarily transfer Lt Gen Kapil Vij from his post as commander of 2 Corps, one of India’s three strike corps, ostensibly because an American spy satellite had caught him deploying his corps into battle formation close to the India-Pakistan border; the third prong was cranked into action with this morning’s (fortuitous) attack on the United States Information Service (USIS), also known as the American Centre, in Kolkata that claimed the lives of four policemen and injured 18, all of them Indian.

According to a security analyst specialising in US foreign policy in South Asia, what will probably follow in the days to come is an US demand – most likely unpublicised — that since India has shown itself incapable of safeguarding American interests (indeed, a patch of the Stars-and-Stripes) in India, it might be more judicious, in terms of US security, to allow the stationing of some US marines on Indian soil.

The US had employed the same ploy in 1996 to arm-twist the Bangladesh government to permit the permanent stationing of a marine corps in Bangladesh, for much the same reason, and it had almost succeeded. It was the Indian government that had bunged the spanner in the works, protesting so vehemently that the Bangladesh government finally found it more prudent to pay obeisance to its easily-offended powerhouse neighbour rather than to a superpower at a remove of a few thousand kilometres.

There are many things that invest today’s attack on the US consulate in Kolkata with questionability: first, why would an Islamist group — Indian authorities have blamed the little-known Harkat-ul-Jehadi-Islami (HuJI), based in Bangladesh but with inroads into North Bengal – attack the American Centre when the US consulate, a more fitting target, is located barely 500 yards away?

Second, if making an ideological point is the case, West Bengal has long been seething with anti-American hotheads with access to any number of Chinese-made Kalashnikovs (the weapons of choice in today’s attack on the USIS).

Third, the whole affair is too bloody pat — it has been timed to coincide with the august presences in India of Al Gore, US Ambassador at Large Francis X Taylor, who is also President George W Bush’s coordinator for counterterrorism, and Federal Bureau of Investigation (FBI) Director Robert Muller.

Today’s incident serves as a blind for one of the most shameful events in independent India’s military annals — Lt Gen Kapil Vij’s relocation of duties, not so much at the behest of the Bush Administration but to allay the multiple and no doubt pathological anxieties of Pakistan President Pervez Musharraf. The US is playing — with alarming brazenness — a double game.

What is it that made it imperative for the US to scurry with the satellite photos of 2 Corps’ upward redeployment to the Pakistan government and “consult” it about what to do to de-escalate what the US thought was a potential border conflagration but which was most likely a message aimed at the Pakistan administration by the Indian government? And why did the Indian government back down when it came to affirming the message? It was, after all, one of a flurry of truculent exchanges, the last of which was, from the Pakistan side, a summary embargo on Indian wheat from being sent overground to Afghanistan, on the allegation that the wheat was contaminated with fungus that might leak into Pakistan’s harvest. When the humiliation of the demand and India’s abject and immediate compliance sinks in, it is hardly a sting that the Indian populace is likely to forgive the US, leave alone forget.