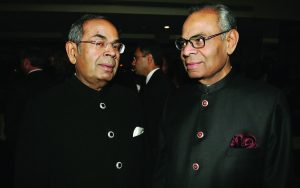 The elusive London-based Hinduja brothers, prime accused in the 64 crore Bofors pay-off case, come calling home at long last. It’s a homecoming that many have been waiting for with a breathless hush. Their unofficial host, the Central Bureau of Investigation (CBI), is the most enthusiastic. Not ones who would like to be summoned, (more used to summoning heads of state as they are, the story goes) the famous trio has decided to give India a taste of their guts and grit.

One needs real courage to stake one’s life and reputation, but a firm assurance from the CBI also helps. The Hinduja’s court appearance in the Bofors pay-off case was cleared on January 10 only after the CBI had asked the immigration authorities not to detain or arrest them on their arrival in India.

Outraged at the sustained blitz of charges being made against them in the Bofors pay-off case for over a decade, the three brothers didn’t need a CBI summons to come to India and clear their billion-dollar brand name.

For the Hindujas are honourable men, as their counsel says in a dramatically plain manner. And they want it to be known in India that they have nothing to hide. Yes, there is a plenty of business to do in their trademark low-key style, minus the infamous Bofors blast.

That’s why, despite no summons from the CBI, the Hinduja brothers hit the shores, a day before their scheduled appearance before the special court of Ajit Bharihoke. No one is sure exactly when they will appear in the court, but their counsel Ujjawal Rana unriddled the enigma, as it were, in that utterly self-effacing manner: “They would wait for their turn and appear whenever the court takes up the matter. “ Call it the fabled Hindujas’ humility or an extension of their awe-inspiring ‘faith zone.’

Their counsel Ujjawal Rana makes it a point to stress the law-abiding credentials of his fabulously wealthy clients. The legal eagle that he is, Rana knows how to phrase his words, “They will appear before the court tomorrow.”

Because they have nothing to fear, they can well damn their enemies, who are hell-bent on blowing up their diligently acquired wealth in an imaginary Bofors blitz.

The presumption of guilt is indeed galling, as the suave Rana would have liked to argue. Preferring majestic statements of innocence, Rana says, “They will appear before the court tomorrow. They firmly believe that the allegations made against them in the Bofors case were false and motivated.”

The Hindujas have nothing to fear and nothing to prove except their innocence. They are not fugitives from the law, who would run away from the judicial process, as Rana says with a flourish, and then lapse into that mother of all clichés: ‘The law will take its won course.”

Yes, for over a decade that’s what the law has been doing, having a six-course meal almost every year, and still hungry for that damning clue that will finally solve the Bofors mystery.

That may, or may not, happen. But the sheer presence of the Hindujas in the court will be quite a spectacle for the thrill-starved paparazzi. Not that they are very photogenic. But if one does manage to access the reclusive brothers’ famous family albums, one can count more heads of state in one place than in any other.