Congress leader Rahul Gandhi on Friday said that the government’s decision to freeze Dearness Allowance (DA) of Central government employees and pensioners for a year was insensitive and inhuman, instead the government should have suspended bullet train and Central Vista beautification project.

“It is an insensitive and inhuman decision of the government to cut DA of central employees, pensioners and jawans, serving the public while fighting COVID-19,” Rahul tweeted.

“Lakhs and crores are being spent on the Bullet Train and Central Vista beautification project which should have been suspended,” Rahul added.

On Thursday, the Central government announced suspension of DA hike for the central employees for the year.

In a memorandum issued on April 23, 2020, Ministry of Finance said that “in view of the crisis arising out of COVID-19, it has been decided that the additional installment of DA payable to central government employees and Dearness Relief (DR) to central government pensioners, due from 1st January 2020 shall not be paid. The additional installments of DA and DR due from 1st July 2020 and 1st January 2021 shall also not be paid. However, DA and DR at current rates will continue to be paid.” 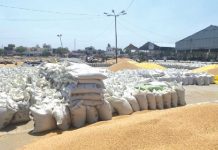