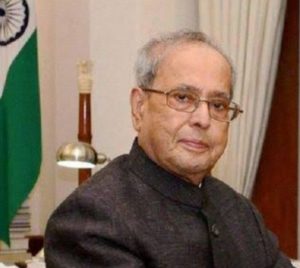 Former President Pranab Mukherjee passed away on Monday. He was 84.

According to the Army’s Research and Referral Hospital, the condition of Pranab Mukherjee declined on Monday morning as he suffered a septic shock due to his lung infection.

President Ram Nath Kovind expressed condolences on the demise of Pranab Mukherjee, President Kovind said, “Sad to hear that former President Shri Pranab Mukherjee is no more. His demise is passing of an era. A colossus in public life, he served Mother India with the spirit of a sage. The nation mourns losing one of its worthiest sons. Condolences to his family, friends & all citizens.“

“As the First Citizen, he continued to connect with everyone, bringing Rashtrapati Bhavan closer to the people. He opened its gates for public visit. His decision to discontinue the use of the honorific ‘His Excellency’ was historic,’ President Kovind added.

Expressing condolences, Prime Minister Narendra Modi said, “India grieves the passing away of Bharat Ratna Shri Pranab Mukherjee. He has left an indelible mark on the development trajectory of our nation. A scholar par excellence, a towering statesman, he was admired across the political spectrum and by all sections of society.”

“During his political career that spanned decades, Shri Pranab Mukherjee made long-lasting contributions in key economic and strategic ministries. He was an outstanding Parliamentarian, always well-prepared, extremely articulate as well as witty,” PM Modi added.