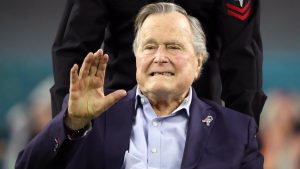 Former United States of America (USA) President George Herbert Walker Bush who managed the end of the Cold War and forged a global coalition to oust Iraqi forces from Kuwait, breathed his last on Friday. He was 94.

George W. Bush called his father a “man of the highest character and the best dad a son or daughter could ask for.”

“Jeb, Neil, Marvin, Doro and I are saddened to announce that after 94 remarkable years, our dear Dad has died. George H.W. Bush was a man of the highest character and the best dad a son or daughter could ask for. The entire Bush family is deeply grateful for 41’s life and love, for the compassion of those who have cared and prayed for Dad, and for the condolences of our friends and fellow citizens,” his son, former President George W. Bush, said in a statement released by family spokesman Jim McGrath.

Bush’s death comes months after the passing of his wife of 73 years, Barbara. The former first lady died in April.

He was the 41st president of the US and led a political dynasty that saw his eldest son win the White House.

George H.W. Bush was a foreign policy realist who also navigated the turbulent but largely peaceful fall of the Soviet Union in 1989 and assembled an unprecedented coalition to defeat Iraqi strongman Saddam Hussein two years later.