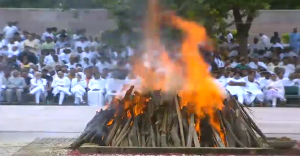 Prime Minister Narendra Modi along with BJP chief Amit Shah, several union ministers, and many party leaders walked behind the carriage carrying the mortal remains of Vajpayee to the Rashtriya Smriti Sthal where the last rites were performed.

Leaders of Saarc and King of Bhutan also paid homage to Vajpayee.

Atal Bihari Vajpayee, 93, passed away at the All India Institute of Medical Sciences (AIIMS) on Thursday evening where he was being treated since last nine weeks.

As a mark of respect to the former prime minister, a seven-day mourning has been announced by the Central government.

Portent of worse to come?