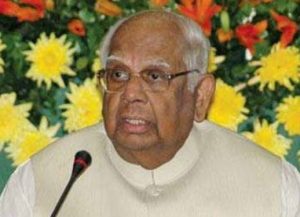 Former Lok Sabha Speaker Somnath Chatterjee passed away on Monday morning at Belle Vue Clinic in Kolkata at the age of 89.

A ten-time Lok Sabha MP, Chatterjee is survived by his wife, son, and daughter.

“Somnath Chatterjee passed away today morning at around 8 am due to kidney-related ailments and old age complications, said Belle Vue Clinic.

Chatterjee has been on ventilator support for the last five days and had suffered a heart attack on Sunday.

President of India, Ram Nath Kovind condoling the death of former speaker said, “Sorry to hear of the passing of Shri Somnath Chatterjee, former Speaker of the Lok Sabha and a veteran parliamentarian who had a forceful presence in the House. A loss for public life in Bengal and India. My condolences to his family and innumerable well-wishers.”

PM Narendra Modi mourned the loss of Chatterjee and said, “Former MP and Speaker Shri Somnath Chatterjee was a stalwart of Indian politics. He made our Parliamentary democracy richer and was a strong voice for the well-being of the poor and vulnerable. Anguished by his demise. My thoughts are with his family and supporters.”

Congress president Rahul Gandhi expressed his condolences, in a tweet, he said, “I mourn the passing away of Shri Somnath Chatterjee, 10 term MP and former Speaker of the Lok Sabha. He was an institution. Greatly respected and admired by all parliamentarians, across party lines. My condolences to his family at this time of grief.”