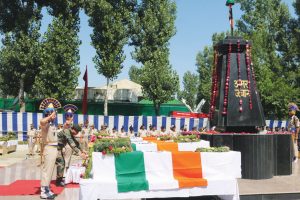 On June 12, vehicle borne militants fired upon a security patrol at KP Chowk in south Kashmir’s Anantnag town killing five CRPF personnel and injuring three others, among them J&K Police personnel including a police inspector Arshad Ahmad Khan. This was first such major attack on the security forces after the Pulwama bombing which killed 40 CRPF personnel.

In retaliation the forces killed a militant and recovered an AK-47 from his possession. The attack took authorities by surprise as militants struck in Anantnag town, the place least affected by the otherwise rampant militancy across South Kashmir. So, this has meant, militants have taken over the town too which goes on to show, militancy is only expanding its footprint in the Valley.

But more significantly, Anantnag attack took place a day before the Prime Minister Narendra Modi was due to leave for Bishkek in Kyrgyzstan to attend Shanghai Cooperation Organization, where a pull-aside between him and the Pakistan Prime Minister Imran Khan was expected to take place. But the killing of five security personnel  altered the context of the SCO summit. The PM Modi had already decided not to use Pakistan’s airspace for his travel to Bishkek. And at the summit itself, the PM avoided any meeting with his Pakistan counterpart.

The Anantnag attack may not have primarily forced India’s boycott of Pakistan in Bishkek, but it may have only reinforced India’s tough stance towards the neighbour.

In his meeting with the Chinese president Xi Jinping,  the PM Modi  reiterated India’s stand that Pakistan should take concrete action against terror before talks can resume.

“Pakistan needs to create an atmosphere free of terror, but at this stage we do not see it happening. We expect Islamabad to take concrete action” to resume talks, foreign secretary Vijay Gokhale quoted the Prime Minister as telling President Xi.

The two prime ministers didn’t talk to each other even when they sat across the dinner table. This, despite the fact that Pakistan Prime Minister Imran Khan had in a recent letter to the PM sought to initiate the dialogue, now that the general election was over in India. Foreign Minister Shah Mehmood Qureshi had also written a separate letter to his Indian counterpart.

But the still strong  militancy  in the Valley and the occasional sensational attacks hardly shows any signs that the environment for talks between the neighbours will  be conducive for talks — at least in the foreseeable future.

The attack at Anantnag was owned by Al-Umar Mujahedeen headed by Mushtaq Ahmed Zargar. He was one of the three militants who was released along with JeM chief Maulana Masood Azhar in exchange for over 150 hostages of the Indian Airlines Flight 814 in December 1999. However, officials believe that the  attack was a handiwork of Jaish-e-Mohammed.

Jammu and Kashmir Governor Satya Pal Malik also claimed that the Fidayeen attack on the CRPF party was carried out at the behest of Pakistan.

“We had conducted elections in the state in a peaceful manner. This did not go down well with the militant handlers based in Pakistan,” Malik  said on the sidelines of a convocation ceremony of a private university at Sher-i-Kashmir International Conference Centre (SKICC) in Srinagar. “Whenever there is peace in the Valley Pakistan tries to disrupt it”.

There is thus little that has changed in and over Kashmir.  The militancy in Kashmir is unlikely to be eliminated anytime soon perpetuating the violence in the state with an occasional dramatic attack or two. And this, in turn, will hinder any dialogue between India and Pakistan or disrupt an ongoing one.

“Redlines and conditionalities for dialogue by either of the two countries will ensure no dialogue,” says Gowher Geelani, a political commentator. “And an endlessly deferred dialogue between the neighbours is not in the interest of peace and prosperity in the region”.