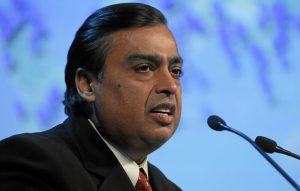 Reliance Industries Chairman Mukesh Ambani retained the top position of being the richest Indian for the 11th consecutive year with a net worth of USD 47.3 billion, according to Forbes magazine.

Interestingly, Ambani’s gain of USD 9.3 billion is also the highest in the year, amid the continuing success of his Reliance Jio broadband telco service.

According to ‘Forbes India Rich List 2018’, Wipro Chairman Azim Premji bagged the second spot, with a net worth of USD 21 billion. He added USD 2 billion in the year.

While ArcelorMittal chairman and CEO Lakshmi Mittal were ranked at the third spot, up from 4th last year, with a net worth of USD 18.3 billion, increasing his wealth by USD 1.8 billion.

Mittal is followed by the Hinduja brothers with a net worth of USD 18 billion and Pallonji Mistry with USD 15.7 billion respectively.

Despite a rout in the rupee that practically wiped out the Indian stock market’s 14 per cent rise from a year ago, tycoons on the 2018 Forbes India Rich List saw a modest gain in their combined wealth to USD 492 billion,” a Forbes India statement said, adding that among the nation’s 100 richest, 11 saw their wealth jump by USD 1 billion or more.