The BJP in Gujarat is witnessing something which was unheard of during the 13-year rule of its former chief minister Narendra Modi. Despite the narrow victory margins and reduced seats from 115 in 2012 to 99 in 2017, the top brass of the state BJP was convinced that the party has sailed through the political storm and now they can start building up from where they had left out.

However, the saffron party leaders, including Prime Minister Modi and BJP president Amit Shah, seemed to have discounted the unrest that was brewing within the party cadre during the elections. This has come to the foreground with several senior leaders from different communities not directly voicing their demands, but using their supporters to make senior leaders realise that all are not happy with the party’s functioning under chief minister Vijay Rupani. They all are demanding shares for the castes and communities that have stood by the party during troubled times.

Ever since the swearing-in ceremony last month, Rupani has been in a fire fighting mode. First, it was his deputy and Patidar leader Nitin Patel who expressed his displeasure over the allocation of portfolios. As soon as Nitin Patel’s issue was resolved, five-term MLA from Bhavnagar Rural seat Purshottam Solanki came out in the open expressing displeasure over portfolio allocation. He even skipped the first cabinet meeting.

Nitin Patel did not mince any words to show his disappointment with the allocation of portfolios. He has been heading the urban development and finance ministry since 2012. In the Anandiben Patel government too he was head of the same ministries. But in the second term of Rupani he was stripped of these two important ministries. “My fight is for prestige and not the post. My respect and honour should be restored in the party. I have voiced my grievance before the high command and have faith they will take the right decision,” Nitin had said.

Nitin’s rebellion became a rallying point for Patidars as BJP leaders from the community as well as Patidar Anamat Andolan Samiti (PAAS) leader Hardik Patel came out in his support. Some Patidar leaders from the Congress also invited Nitin to join the party. Even Hardik issued a statement asking the deputy CM to join the Congress with 10 other MLAs to restore Patidar honour.

However, to placate a sulking Nitin Patel it required intervention of top BJP leaders like Amit Shah and even some assurance from the PMO in New Delhi. In case of Purshottam Solanki, a prominent Koli leader (mostly fishing community), who was unhappy over the allocation of portfolios in the new BJP government in Gujarat, it was his supporters who seemed more angry or disappointed. Demanding that “good” departments be allocated to their leader, Solanki’s supporters, led by his brother and former BJP MLA Hira Solanki, had gathered at the minister’s residence in Gandhinagar last week. But after Rupani’s assurance, Solanki’s supporters called off their protest. “Rupani has assured that I will be given a better department when the next cabinet expansion takes place after one-and-a-half months,” Solanki had told reporters in Gandhinagar after meeting the chief minister.

But before Rupani could convince Solanki, supporters of another five-term MLA from Shehra seat in Panchmahals, Jetha Bharwad, demanded a cabinet berth for Bharwad. However, Bharwad, who represents a predominantly tribal population, has made it clear that everything happened without his knowledge. “There is no threat for the party from my side after my supporters’ agitation,” he said. Bharwad also claimed that he was a committed soldier of the BJP and was happy where he was.

The story doesn’t end here. A very junior BJP MLA, Jhankhana Patel from Choriyasi seat in Surat, too was reportedly demanding a place in the Rupani government. Though Jhankhana, a Koli Patel, categorically denied that she had demanded a ministerial berth, her supporters and senior BJP leaders from Surat feel that the Diamond City had not got enough representation in the state cabinet despite the fact that BJP has been winning all the 12 seats of Surat city since the last three elections.

Senior BJP leaders in Surat said that they expected at least three ministers, including one woman, from Surat as two women candidates of the ruling party had won from the Diamond City. “It is not fair that the state BJP ignores Surat’s right to proper representation,” a senior BJP leader from Surat said.

On the other hand, the turncoats from Congress who had joined BJP before the assembly polls as well as several other MLAs and ministers from different communities are demanding larger shares in the new government. Though other ministers have not expressed dissatisfaction publicly as Nitin Patel and Solanki did, the murmur of ire is beginning to build up. Several senior MLAs who were ministers or held key posts now want those powers back.

Moreover, senior MLAs who have served between three and five terms as MLAs but were never made ministers are also pitching for positions of significance. “Those who have made no contribution to the party, and whose career in the party is shorter than my career as an MLA, have been made cabinet ministers,” lamented a senior BJP leader.

Last week, a group of former Congress leaders such as C K Raulji, Ramsinh Parmar, Vipul Chaudhary, and others who have joined the BJP met Rupani and Nitin Patel and demanded a place in the new government. Raulji said, “I have asked for fair representation, but I will accept whatever the party decides.” Former Congress leaders who contested on BJP tickets and lost in the 2017 assembly elections are pressing for positions such as parliamentary secretaries. Several BJP leaders appointed by the previous Rupani government to various boards, corporations, and government agencies want their terms renewed. Many senior BJP leaders who got nothing over the past several years are pushing for roles in such boards and corporations.

Sources close to Rupani say that the CM is in consultation with top BJP leaders including PM Modi over the growing unrest within the party. It will not be a surprise if Rupani expands his cabinet in the next couple of months.

The Congress too was facing the community and caste hurdle while closing in on Congress legislative party leader (CLP) and Leader of Opposition in the state assembly. The Congress high command chose Amreli MLA Paresh Dhanani, who belongs to the Patidar community, as their CLP. He is also considered to be close to Congress president Rahul Gandhi. Dhanani has also been credited for Congress winning all the five seats in Amreli district.

Other Congress leaders who were in the race for CLP included Koli community strongman Kunwarji Bavaliya and tribal leader Mohansinh Rathwa. However, the party chose Dhanani, who has been quite vocal in the Assembly and also represents the Patidars who have been agitating for quota under the OBC category. 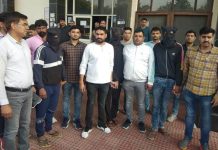 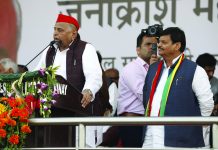