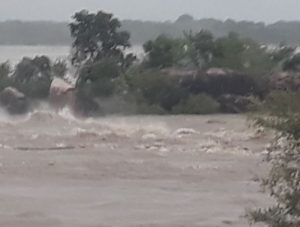 Flooding and heavy rainfall in Uttar Pradesh in last 24 hours has claimed lives of three people and resulted in destruction of as many as 232 houses in various parts of the state.

“We are hopeful that the water level will decrease in the next four to five days if the rains stop. Today, we have distributed dry gains via boats but in the upcoming days we will send all the relief material by a tractor, the moment the roads get de-clogged,” official said.

While taking stock of the situation in the flood-hit area official further added that they are working day and night in order to provide relief material to the victims.

In view of the situation, official urged people to donate mosquito nets and repellant creams to flood-hit victims.

He further said that scores of medical camps will be set up in the coming days for people as there are dire chances that floods will give rise to the transmission of communicable diseases like typhoid, fever and cholera.

On September 7, Chief Minister Yogi Adityanath conducted an aerial survey to take stock of the situation in flood-affected areas of Unnao, Kanpur and Farrukhabad.