Five people were arrested over the weekend in Noida for allegedly smuggling liquor from Delhi into Uttar Pradesh, officials said on Monday.
Over 15 cartons of liquor were also seized on Saturday and Sunday and three vehicles in which the alcohol was being transported were also impounded, officials from the Gautam Buddh Nagar excise department said.

Bringing liquor meant for sale in Delhi to Uttar Pradesh is prohibited and legal action is being taken against offenders for denting the state’s revenue, the excise officer said.

Only one unsealed bottle is permitted if somebody from Delhi is entering UP through Noida, Singh said.

Over 70 people have been arrested since April at the border points of Delhi in Noida by the excise department, with the help of the local police, as crackdown continued on liquor smuggling, according to the officials.

The UP government instructed officials for the crackdown keeping in view the revenue loss to the state as heavy discounts on alcohol rates continued being offered in Delhi, they said. 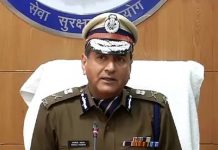