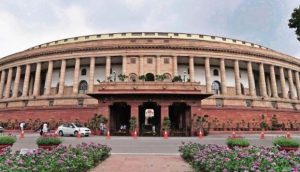 The first session of 17th Lok Sabha began on Monday with Prime Minister Narendra Modi, was the first among MPs to take oath in Lok Sabha.

Ahead of Lok Sabha session, Modi has said, “Today marks the start of the first session after the 2019 Lok Sabha polls. I welcome all new MPs. With them comes new hopes, new aspirations and new determination to serve.”

“The role of an Opposition and an active Opposition is important in a Parliamentary democracy. The Opposition need not bother about their numbers. I hope they speak actively and participate in house proceedings,” PM Modi said.

While talking about the women ratio in the parliament, Modi said, “I am happy that this new house has a high number of women MPs. My experience also suggests that when the Parliament functions smoothly, we are able to fulfil numerous aspirations of the people of India.”

The Session will mainly be devoted to Oath taking, Election of Speaker, the Motion of Thanks on the President’s Address, Financial Business relating to Union Budget for 2019-20.  However, time will also be provided for the transaction of essential Legislative and Non-Legislative business during the Session.

Resolution seeking Extension of Proclamation issued by the President on December 19, 2018 under article 356 of the Constitution of India in relation to the State of Jammu and Kashmir is also required to be approved by both Houses of Parliament by July2, 2019.

The Economic Survey of India will be presented to Parliament on July 4, 2019.

On July 5, Union Budget will be presented by Nirmala Sitharaman.

Ten Ordinances have been promulgated during the inter-session period which are to be replaced by Acts of Parliament as they shall cease to operate at the expiration of six weeks from the reassembly of Parliament i.e. by August 1.

46 Bills have lapsed on dissolution of 16th Lok Sabha which various stages in both the Houses were.  Some of these important Bills are likely to be revived and brought before Parliament.

PM Modi on Sunday called on leaders of all political parties in Parliament to work cohesively with the government in running the House smoothly and to collectively address issues related to the welfare of people.

To begin the newly constituted Lok Sabha on a positive note, PM Modi has invited Party Presidents of all political parties with representation in the Parliament, on June 19, and MPs of both Houses, on June 20, to freely interact and exchange views with the Government.