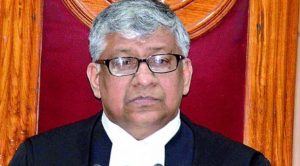 Telangana and Andhra Pradesh Governor ESL Narasimhan administered oath to him at a ceremony held at Raj Bhavan.

Later in the day, Justice Praveen Kumar will take over as the acting Chief Justice of Andhra Pradesh High Court.

With this, the separate high courts for two states will become functional from Tuesday.

The High Court of Judicature at Hyderabad had been serving as common high court of Andhra Pradesh and Telangana since June 2014 when Andhra Pradesh was bifurcated to carve out Telangana.

The Central government last week issued a notification for bifurcation of the High Court between the two states.