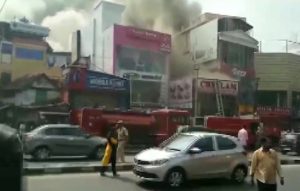 A fire broke out on Tuesday in a commercial building at MG Road, in Kerala’s Thiruvananthapuram.

No injuries or causalities were reported so far in the incident.

According to the reports, the shop has been completely gutted in the massive fire.