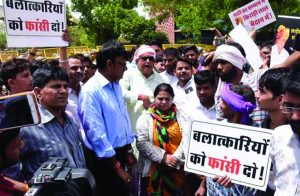 A Dalit woman was gang-raped on April 26 in Rajasthan’s Alwar. Police were informed on April 30. However, the FIR was filed on May 7. It is alleged the police did not act quickly because of the election in the state, which voted in the Lok Sabha polls in two phases on April 29 and May 6. The police, on its part, said that they have arrested all the six accused — Indra Raj Gurjar, Mahesh Gurjar, Ashok Gurjar, Hansraj Gurjar, Chhote Lal Gurjar and Mukesh Gurjar.

On April 26, the woman was riding pillion on a motorcycle with her husband when the accused, who were on two bikes, waylaid them in Alwar and took them to a field. They allegedly thrashed the husband and raped the woman in front of him. Mukesh Gurjar allegedly filmed the crime in his mobile phone. After the couple went to the police, the accused allegedly demanded money for not circulating the video on social media.

On May 7, the Rajasthan government removed Alwar police chief Rajiv Pachar and suspended another officer, Sardar Singh, who was in charge of the police station where the survivor had approached. Four more policemen have been taken off duty.

According to National SC/ST Commission Vice Chairman L Murgan, a compensation of 4 lakh has been paid to the gang-rape survivor, apart from 50,000 from the women and child development department. The incident had sparked protests in parts of Rajasthan – Makrana in Nagaur district and Kota – with people seeking swift justice in the case.

With the Congress government in the state facing flak over the incident, Chief Minister Ashok Gehlot said that the culprits of the heinous crime will not be spared and speedy trial will be ensured. He said that the state government will make arrangements that an FIR can be filed at the Superintendent of Police (SP) office itself if the SHO concerned does not file the first information report and investigate complaints.

“We are going to take an important decision that if an SHO doesn’t file FIR then there will be a provision that FIR can be filed at SP office and it will be monitored why the FIR was not filed at the police station concerned and action will be taken. Steps will be taken so that crime rate reduces in the state,” Gehlot said. He said that a committee has been constituted to investigate the matter and lapses that occurred.

“Action will be taken based on the inquiry report against the officers,” the chief minister said, adding that the state government will appoint a Circle Officer (CO) rank official to look into the case of crime against women in the state for effective monitoring and speedy investigation.

Rajasthan Chief Secretary D.B Gupta said that action will be taken after committees constituted to investigate the matter submit their reports. Jaipur Divisional Commissioner and DIG vigilance have been asked to probe the matter separately. They have been asked to submit report in 10 days. Further action will be taken after the report, Gupta said.

The case took on political hues with the BJP accusing the Congress state government of not doing enough to control crime. “In Congress Ruled Rajasthan for 7 days the cops sat on Dalit gangrape and waited for the polls to end. If the same would have happened in a BJP ruled state, the gang of liberals would have unleashed their most scathing attack on Modi Is Lutyen extending it’s protection to Rahul?” BJP spokesperson Sambit Patra tweeted.

“The guilty in the Alwar gang-rape case should be hanged. The Supreme Court should take action against the Congress government, the police and the administration in the state. This matter is not just related to Dalits but all women,” Bahujan Samaj Party chief Mayawati reportedly said.

The National Commission for Scheduled Castes, meanwhile, has asked for a criminal case against police officers who allegedly delayed acting on the woman’s plea for help. The incident, after which a clip of the rape was circulated by the attackers, has provoked rage and protests across the state.

“I have asked that negligent police officers should be booked under section 4 of SC/ST Act, charge sheet should be filed within 15 days and the case should be monitored daily,” the Commission’s vice chairman L Murgan told reporters on Friday, news agency PTI reported.

The victim’s husband had claimed that he had approached the police on April 26 after the incident, but an FIR was filed on May 7. He had alleged that the police did not take action saying that they were busy with elections. The victim’s family has submitted a memorandum for speedy trial, compensation and government job. The Commission has also asked the state government to check how the victim’s husband can be provided compensation under SC/ST (Prevention of Atrocities) Act, he added.

Three rape incidents have been reported from parts of Alwar district in less than two weeks. On May 7, a 40-year-old Dalit woman was allegedly raped inside the Community Health Centre (CHC) by an ambulance driver and a compounder at Kathumar. The district police received the complaint about the gangrape on May 9. As per the FIR, on May 7 night, ambulance driver Ram Niwas Gujjar locked the door of the delivery room from inside, gagged the victim with a piece of cloth before he and compounder Girja Prasad allegedly raped her.

On May 7, a 20-year-old woman had lodged a complaint that she was allegedly kidnapped, drugged and gang raped by three men in Alwar’s Thana Gazi police station area. She was held captive at different places for four days, police said.

The Alwar gang rape case will be probed by a Rajasthan government officer in the rank of Divisional Commissioner. The state government has decided to appoint Jaipur Divisional Commissioner K.C. Verma as the Investigation Officer (IO) in this case. He is required to submit the final report to Home Department in next 10 days, said the order signed by the Department Deputy Secretary Ravi Sharma. As per the order, the report shall look into the negligence of police officials in discharging their duty in the case.

The Alwar Additional Director General of Police (ADGP) Govind Gupta had said that action will be taken against derelict officials after looking into the primary investigation report. He also denied any kind of political influence behind the alleged delayed action by police in the case.

Police officials confirmed that discussions are on to see if a case can be registered against derelict police officials under Section 166 A (C) in case primary investigations prove the culpability of the concerned Superintendent of Police (SP), Station House Officer (SHO) and five other policemen. Under this section, a police official can be booked if he or she fails to register a complaint on time, and can be sent behind bars for two years.

Following protests by the BJP, the matter has reached Congress President Rahul Gandhi who had sent Congress Scheduled Caste (SC) Department President Nitin Raut to Alwar to look into the issue. Raut met the victim and her family and then sent a report to the Congress President.