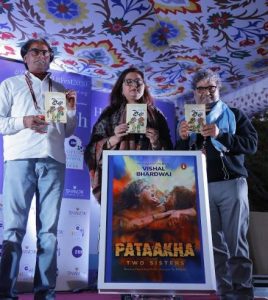 Do you think in current times, the space for discussion no longer exists, that you are an anti-national if you don’t concede to the government?

That is the problem this current regime has brought this society to (that) if you don’t agree with me, you are against me, which is not (the way), not a democratic way. I should be able to criticise, to be able to not agree with you. I should not rattle you. Why should I be the replica of your ideology?

Are artists self-censoring themselves now which was not the case when the Congress was in power?

Yes, because I think Congress had a big heart as far as art is concerned. Moreover, they were not concerned about what art or artists were doing… they were busy filling their pockets. At least they did not rob us of our souls.

Can music and films have a larger role to play role in these sharply polarised times?

Films should reflect what is happening in the society because they are the mirror of the society. Music has so many facets. It can do so many things – make a revolutionary songs, soothe you in your pain. Music and poetry can say a lot what masses and common man may say in an abuse but in poetry, it won’t sound like one.

With so much of censorship happening (by the powers that be), independent films and music still have freedom of expression to talk about dissent?

Only indie music, besides films, can express freely because movies need funds from the corporates. It is all about business, they are not bothered about the state of the country because they are with the people who are oppressing.

Do we see you making a film on JNU or Jamia anytime soon since you have been so vocal and involved in it?

I don’t know because right now I am a part of the movement and when you are a part of it, you don’t have a perspective on that. You need some time to come out of it and then reflect on what happened.

What do you feel about movies like Uri or other nationalist movies?

I don’t have a problem with films like Uri per se but I am opposed to the idea of releasing them close to the date of elections to support a particular party win votes, and bashing Pakistan for the rhetoric and jingoism. I don’t like the biopics being made on the politicians(smiles). They may it so badly that even their own karyakartas fall asleep watching them. Good that the Right does not have the intellect or aesthetics to understand the nuances of a good film.

No conversation with Vishal Bhardwaj is complete without mentioning Shakespeare. After Maqbool, Omkara and Haider, are you done with the Bard?

Not at all. I am working on a trilogy of comedies and contemplating which one to start with. I will keep piercing and bothering his soul.