The moment you find out that the name of one of the protagonists (Khemu) in Go Goa Gone is Hardik, you count the minutes to the inevitable joke. It comes about 30 minutes into the film — to the film’s credit, as a throwaway line in the beginning of the first song. It illustrates what the film’s comedy is all about: using the ‘A’ certificate and a Beavis-and-Butthead sensibility to go for the easy laughs, yet understanding that simply punning on the name Hardik isn’t enough to carry a film in 2013.
Instead, Raj and DK’s “first Indian zombie film” — conveniently forgetting the Ramsay Brothers’ 1971 Do Gaz Zameen Ke Neeche and even last month’s Luke Kenny-starring Rise of the Zombie — relies on smart writing and a genre awareness that ensures it isn’t another illogical blood-and-gore thriller. Go Goa Gone is neither a Night of the Living Dead nor a Shaun of the Dead; neither a generic horror film nor an overt parody. It is a fairly conventional slacker comedy, a watered-down Delhi Belly (though I suppose the urtext for the Indian slacker zombie genre is Jugal Mody’s recent novel Toke).
The smart writing shows itself in the lack of obvious logical discrepancies in the film. I spent an hour before watching this film reading through some of the Vigil Idiot’s recent reviews-cum-comics of other 2013 Bollywood releases, and found myself cringing afresh at the contrived plots of the films I’ve had to review this year. Go Goa Gone, at least ostensibly, keeps it within the rails. Faced with the prospect of their rave party on a Goan island turning into some sort of apocalyptic event, Hardik, Luv and Bunny actually pause to think about what they are up against, even if, as Hardik points out, it really doesn’t make much difference to their chances of survival that it’s zombies and not vampires.
Much of the humour is derived from their constant attempts at make sense of the confusion (“We know nothing and we’ve learned ghanta” is the response to Luv’s attempts at Socratic reasoning), especially when they acknowledge, unlike most other horror films, that there already exists a century’s worth of horror films. At one point, Luv uses a technique he says he saw in some movie — Shaun of the Dead — and tries to blend in with the zombies. At another, Bunny breaks the fourth wall and complains that as the heroes’ boring friend, he’s going to be the first to die.
Something tells me Saif Ali Khan took the role only because he gets to say “I’ll be back!” He says it in the worst possible manner; what else do you expect from an Indian using a fake Russian accent to quote an Austrian-American? The hideous accent is priceless (“Come and get me, mother-bitches!”), especially when he drops in the odd Dilli gaali. As the badass (fake) Russian mobster who will sherpa our heroes out of the island, he has a license to ham and be the Hollywood action hero he’s always wanted to be, which he takes gleefully. But the film’s most powerful scene also centres on him, as he is forced to cut loose his trusted ally Nikolai once the latter gets bitten.
Sure, the film gets repetitive after the interval, and sure, much of the humour is trite stoner jokes (“We should form a Bharatiya Joint Party,” Hardik giggles in the opening scene). Also agreed: the lack of badass villains makes it a distinctly poor cousin of Delhi Belly. But Go Goa Gone works as a result of its charming lunacy, and makes a great case for similar films in the days to come. 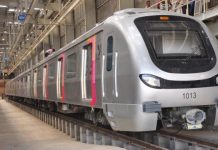