I must confess I never saw Aashiqui, the 1990 cult romance that everybody remembered so fondly as the Bhatt publicity machine rammed the release of its ‘sequel’ down our collective throats last week. My mother did; she says the only thing she liked about it was that Rahul Roy chose a fire engine to make the customary dash to the airport in the climax, though she preferred Imran Khan’s horse in Jaane Tu… Ya Jaane Na. The film’s tremendous success made household names of Roy (who reportedly signed 47 films in 11 days to cash in on his new star status) and Anu Agarwal, both of whom promptly disappeared from the public consciousness after failing to make anything that came close to matching its popularity.
The theme of the man’s ego being hurt by his girlfriend’s success is ancient, and in Bollywood, movies which do so will invariably pale in comparison to Hrishikesh Mukherjee’s Abhimaan. Watching the beginnings of Aashiqui 2, as yet another ageing musician discovers new talent in the form of a wide-eyed girl he will launch into a successful career and fall in love with (“I’m not that kind of girl,” she says, establishing her chastity and assuring the audience that the mentor lusting over his protegée is completely kosher; they’re musicians after all), the sinking feeling that this is going to be the same film all over again sets in. But no, it’s a bait-and-switch. RJ (Roy Kapoor) frequently teases the jealousy angle, but doesn’t follow through, choosing instead to chart the even more familiar course of the alcoholic whose addiction is the obstacle in the path of true love. Sigh. So this is what Mahesh Bhatt meant when he said the film would be “more intense than the original and a superior product”.
RJ excuses his behaviour to the audience — who’re supposed to root for him, since he is fighting for Love — by telling Aarohi (Kapoor) that she should leave him, because his boozy presence is going to ruin her moment of fame. Aarohi refuses, naturally; her career isn’t as important as the man she loves, and she’ll fight to cure him of his addiction. Not through rehab or anything like that, but through pure, unadulterated Love. She probably got the dosage wrong, for RJ goes ahead and has his benders anyway, and the rest of the film is a long, agonising sequence of him losing his dignity bit by bit to the bottle and generally making an ass of himself. Aarohi’s response is never anger — that would be unfaithful to Love — but more of the same in increasingly cloying scenes that the acute lack of chemistry between the two makes unbearable to watch.
The film’s ‘intensity’ comes mostly from shouting that Roy Kapoor and Shaad Randhawa, who plays his manager Vivek, try to pass off as impassioned, and from RJ’s repeated drunken episodes, which get tedious very fast. RJ’s alcoholism, never really explored beyond the usual clichés (“Main marne ke liye nahin peeta, main peene ke liye marta hoon,” he says before driving off with a bottle of wine and ramming his car into a palm tree on the streets of Panjim), is treated with the usual moralising. Even the soundtrack, which was what made the original so iconic, is the generic Sufi-pop that the Bhatts have employed for the better part of a decade now, which might be doing well thanks to the untiring marketing, but is unlikely to be remembered a year from now.
With better writing, acting, directing and music, Aashiqui 2 could conceivably have expanded on a decent premise to be a truly great romance of our times. As it stands, however, it seems destined to be lost in the sea of mediocrity it never really tries to escape. 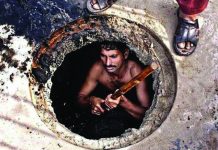