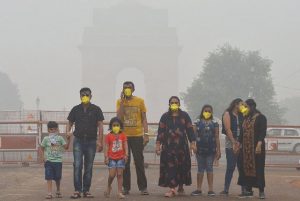 Even as the Air Quality Index of the national capital continues to hover around the “severe” category as AQI bordered over 400 in the first week of November, the Punjab Agriculture University agriculture scientists maintained that straw burning incidents were five per cent lesser as compared to previous years.

An AQI between 401 and 500 is considered to be “severe” and between 301 and 400 belongs to the “very poor” category. The AQI recorded on November 4 was 450, which was in the “severe” category. An AQI above 400 can affect healthy people and seriously impact those with existing diseases, according to the Central Pollution Control Board (CPCB). A layer of smoke and pollutants had built up over Delhi-national capital region (NCR). Was it due to the stubble fires raging in neighbouring Punjab and Haryana or local emissions such as traffic and fire crackers?

The data by Punjab Agricultural University’s (PAU) states that the area under stubble burning in the state has declined by 5.23 per cent. According to GS Manes, additional director of research (farm mechanisation and bioenergy), “The Punjab Remote Sensing Centre data shows the area under paddy straw burning during this year as 749.43 thousand hectares as compared to 790.77 thousand hectares last year, clearly showing a decline of 5.23 per cent”.  He said that this decline in the paddy straw burnt clearly showed improvement in the adoption of paddy straw management technologies as compared to last year.

Punjab Agricultural University’s (PAU) vice-chancellor Baldev Dhillon had urged farmers to desist from burning stubble in fields to curb pollution. He had said, “It is not wise to burn stubble as it will pollute other cities as well. Stubble burning in no solution to any problem, rather farm fires lead to several problems. Firstly, it is injurious to health and the smoke from the fields causes blindness on roads which leads to accidents and it is not healthy for our soil health”.

In Punjab and Haryana, farmers rue about the rice straw because when paddy is harvested by a combined harvester and thresher, the machine leaves stubble on the fields. With only a week or two between the rice-harvesting season and the wheat-sowing time, farmers often burn the stubble to quickly eliminate the paddy stubble. The farmers find stubble-burning to be easier, low cost and time-efficient, compared to alternatives that demand more time, investment and labour. Unless the state governments pitch in to subsidize, there is no sure measure to stop farmers from the traditional practice of straw and stubble burning.

The Punjab government had announced to make the state a zero stubble-burning zone by offering a 50 per cent subsidy on machines for individual farmers and 80 per cent for cooperative societies and farmers’ groups. It is worth mentioning that the Apex Court had directed the Punjab and Haryana governments to provide 100 per quintal to small farmers to manage the stubble; given that the average productivity is 25.6 quintal per acre in Punjab, they may receive about 2,560 per acre. It is learnt that the government has assigned 8,000 nodal officers to oversee the compensation exercise, to prevent stubble-burning, and to increase awareness of alternate technologies.

Indeed the stubble burning has been a big issue this side and with the ongoing agitation against the recent Farm Legislations, the Bharatiya Kisan Union (BKU) (Lakhowal) had threatened that farmers would be forced to burn stubble. Its general secretary Harinder Singh Lakhowal said that farmers would be forced to burn stubble if the government failed to give a compensation of 2,500 per acre. Lakhowal said the apex court had issued directions to the government last year that since farmers were not in a position to bear the additional cost of straw management, the government ought to lend financial assistance to them if it wanted that stubble burning should stop.

He asked the government to incorporate the management cost in the Minimum Support Price (MSP). He added that there is a lot of anger among farmers against the central government for imposing three farmer laws. “The only way to stop stubble burning is to provide assured financial assistance in the form of bonus on crop or lump sum grants on the basis of land holding.”

The Chairman of Punjab Pollution Control Board (PPCB) Prof SS Marwaha too had visited Punjab Agricultural University (PAU) to deliberate on the issue of paddy straw burning and seek support of NSS volunteers to create motivational awareness among farmers not to indulge in this practice. He interacted with Dr Baldev Singh Dhillon, Vice-Chancellor, PAU, and senior officials of the University.  Representatives of all the four State Universities — Punjab Agricultural University, Ludhiana; Guru Nanak Dev University (GNDU), Amritsar; Punjabi University, Patiala; and Guru Angad Dev Veterinary and Animal Sciences University, Ludhiana, participated in the discussion. Dr Dhillon said diligence and awareness are essential to exhort the farmers to say no to stubble burning and put paddy straw to proper use. He also informed the delegates about the crop residue management machinery and use of paddy straw for compost making, the technology developed by Department of Microbiology, PAU.

Lauding PAU’s contribution to check stubble burning in the State, Prof Marwaha said about 30,000 NSS volunteers from the colleges affiliated to Punjabi University, Patiala, played a key role in reducing straw burning incidents in Punjab. “During 2018-19, the number of fire incidents as well as acreage under stubble burning had come down by 10-12 per cent as compared to 2017-18,” he disclosed. Divided into 1,500 groups of 20 students who visited 4,500 villages in the State, the volunteers made the farmers aware of the harmful effects of stubble burning, he added. To expand the scope of motivational awareness programme, Prof Marwaha sought the participation of NSS volunteers of PAU and other State Universities as well. Dr JS Mahal, Director of Extension Education PAU, observed that this illegal practice leads to loss of nutrients and microdiversity, deterioration of soil physical health, air pollution, health hazards and accidents. He revealed two options including in-situ management which involves wheat sowing with mulch, and incorporation; and ex-situ management which involves collection and removal and use of straw. He said, “The best utilization of paddy straw is its retention in the soil.”

The decline in the paddy straw burnt area clearly showed improvement in the adoption of paddy straw management technologies as compared to last year. Experts say that monitoring the air quality or imposing crippling fines on the errant farmers must be supplemented by other measures. The machinery, including Happy Seeders, at present is too costly and farmers already hit by the ongoing agitation, can’t ill afford these.