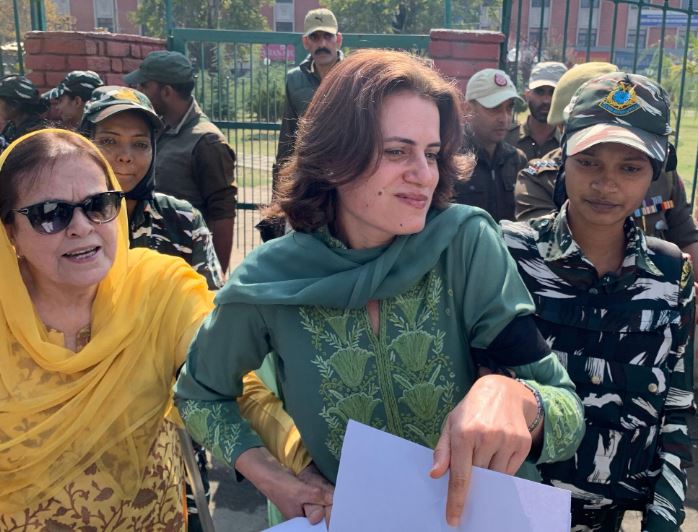 Former Jammu and Kashmir chief minister and National Conference leader Farooq Abdullah’s daughter and sister were among the several women protesters detained in Srinagar on Tuesday during a protest against abrogation of Article 370 and bifurcation of Jammu and Kashmir into two union territories, officials said.

Abdullah’s daughter Safiya and sister Suraiya were leading a group of women activists when they were detained.

Women protestors wearing black arm bands and holding placards were not allowed by the police personnel to assemble and were asked to disperse peacefully.

Peoples Democratic Party (PDP) chief Mehbooba Mufti said curfew can be placed on a city but certainty not on feelings & thoughts.

“A 56 inch macho government that detains lady senior citizens & women for peacefully protesting. Curfew can be placed on a city but certainty not on feelings & thoughts. How many more voices will you smother?” Mehbooba tweeted.

“Kashmiri women inc Farooq sahabs daughter & his sister were detained by police for peacefully protesting abrogation of Article 370. GOI wants to crush civil disobedience & push Kashmiris to a point where violence may erupt. Then that excuse will be used to justify the repression,” Mehbooba added.

Several political leaders in the state including, Farooq Abdullah, his son and former Chief Minister Omar Abdullah and Mehbooba Mufti were placed under detention or house arrest after Centre announced its move in August to end special status granted to Jammu and Kashmir under the Article 370 of the constitution and split it into two union territories.