Former Jammu and Kashmir Chief Minister and National Conference president Farooq Abdullah on Tuesday rubbished Home Minister Amit Shah’s statement that he was at home by his own will. He said that he has been placed under house arrest.

In an emotional outburst, Abdullah said he broke the door to come out and speak to the media.

“I am not allowed to go out of the house,” he said while speaking to news channels.

Abdullah also lashed out at the Central government over scrapping of Article 370 and said that this is unconstitutional.

“This is the dictatorship by Modi government,” he said, as he called the government actions undemocratic.

Abdullah said he does not know how many have been arrested. “Nobody is allowed to come in or go out, we are under house arrest,” he said.

Earlier NCP’s Supriya Sule demanded to know why Abdullah was not present on the day the Lok Sabha was debating crucial legislations related to Jammu and Kashmir.

Responding to it, Amit Shah said Farooq Abdullah was at his home in the Valley. “He has neither been detained nor arrested. He is at his home, out by his own will,” Shah said. 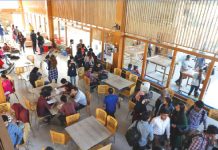